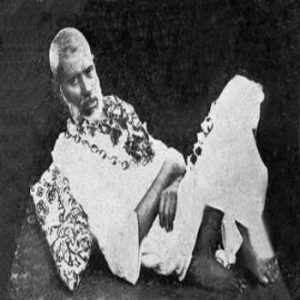 One day Baba Tajuddin surrounded by hundreds of His devotees, looked at the Heavens above and spoke softly, ‘Allah, ask Me for explanation regarding their sins and not them, for they are Mine’.

Baba Tajuddin, according to Avatar Meher Baba is known as the Taj or Crown of Sufis. He promised the very Creation, that till He did not evolve one hundred and twenty five thousand of His disciples-devotees-lovers-children into Saints, He would not rest in peace, either here or beyond.

He was clear that removing the suffering of one human being was more worthy than going a thousand times to Haj and performing namaz or prayers at each stop of the Pilgrimage.

Though one must understand that according to Baba Tajuddin, offering prayers, each moment of the day, was the only way to live; no matter whether one was in isolation or one walked in the world as a householder.

Prayers according to Him, were mandatory but very often He mentioned that, the best Haj or Pilgrimage for a devotee is to win a heart of a person by selflessly serving the individual. ‘Because man’s heart is a thousand times better than Kaaba (holy place at Mecca).’

Baba Tajuddin was born on January 27th 1861, in the town of Kamptee near Nagpur. He did not cry and the wise ones near The Child thought something was wrong with the Infant and keeping with the tradition of those days, The Baby was branded with hot iron rods on His temples and soles of the feet. The Child cried for a while and then looked around with strange bewilderment.

When young He began to read a lot of literature written by poets and Sufi’s. One stanza particularly had a tremendous impact on Him, and all His life He lived with the philosophy of, ‘‘Drink liquor, put fire on the Quran and the Kaaba, go and live in the market place, but never hurt the Soul and heart of another being”.

This philosophy always remained with Baba Tajuddin as nothing mattered to Him but the respect accorded to each being, man, woman, animal and all of Creation.

Hazrat Hussaini a very evolved soul, recognized the Oneness radiating through Baba Tajuddin. Both of Them would spend a lot of time together and Baba Tajuddin would serve the Hazrat. It was as though Hazrat Hussaini was only waiting for Baba Tajuddin. He gave the young Man all His knowledge and power and then took Samadhi. Even after His Guru had left His body, Baba Tajuddin would continue spending the entire night in prayer and meditation next to His Guru’s Tomb. He barely ate anything, hardly slept, and was always within.

He began to roam around, sometimes, half clothed, sometimes naked, living under bridges, or wherever His innocent heart guided Him. Children would stone Him and knowing they got some perverse pleasure in doing so, He would Himself gather stones and make heaps of them, so that the stupid kids could pelt Him with ease. If somebody tried to stop the kids from hurling stones at Baba Tajuddin, He would get upset with the well wisher, making sure that nobody came between Him and the children.

But slowly Baba Tajuddin’s powers began to show through. He randomly began to predict things and saved people from fatal calamities and changed fortunes of the people. Slowly news trickled in like rain drops that became a raging storm, that this so called Mad Man was in reality a truly evolved and powerful Soul.

As His fame began to grow, Baba Tajuddin, realised that He had less time to pray and meditate. People flocked to Him for financial gain and for material comfort and the usual stuff all of us are so engrossed in. He would abuse and thrash people, and more people came, happy to be abused and thrashed by a Master. He realised that hardly anybody came to Him for spiritual growth and evolvement. Everybody wanted just material gain while spiritual gain could boil its evolved head.

Tired of the crowds and their incessant demands, He realised that the best way to achieve isolation and at the same time still continue to live in His home town and help the people and do His spiritual work in all the different dimensions, was to do something simple and effective and hence Baba Tajuddin announced to a person who had come to seek His blessings that, ‘It is time I got certified as a mad Man and lived in a mental asylum’. The poor man didn’t understand a word.

Baba began to perform miracles from within the hospital. Baba Tajuddin was in the mental asylum for sixteen years. In that period, He was known all over the country. Dignitaries like Mr. Antony MacDonald, the Chief Commissioner of Nagpur, Colonel Rowe, the Civil Surgeon, The Extra Assistance Commissioner, Mr. Khan and the city Superintendent of Police Mr. Moti were devotees of Baba Tajuddin. But the most important as well as the most humble of all His devotees was the Maharaja Raghoji Rao Bhonsle, a King and still one of the most ardent devotees who served Baba Tajuddin throughout his life, with not an ounce of ego, pride or showmanship. The Maharaja considered himself as a servant to Baba Tajuddin and even now his devotion to Tajuddin Baba is spoken about with reverence.

In the end the Maharaja took permission from Baba Tajuddin, that if He was to be accessible to one and all, then it was time He gave permission to move out from the mental asylum.

Tajuddin Baba looked at the Maharaja, knowing that only pure love emanated from this child of His. He nodded and gave His permission. The Maharaja paid two thousand rupees (those days a large sum), and after sixteen years, Tajuddin Baba physically entered into the outside world.

The Maharaja had made all arrangements for Tajuddin Baba. A special place in the palace, a horse carriage, muscular men, but no rules and regulations of conduct, from either obviously Baba or His devotees. The Maharaja would personally serve Baba Tajuddin without any ego, and through complete love and surrender. It’s a beautiful love story of the King and The Fakir.

But Baba would still sleep on the floor. Still walk barefoot in the scorching sun. He would have tea at four in the morning and then leave early in the morning and keep walking sometimes till way into the afternoon. In a short while shops selling flowers, sweet meats, various things that could be blessed by Baba Tajuddin mushroomed up. Hundreds of devotees would gather around or walk with Him. People knew His whereabouts and stalls came up, even in the forest where He would spend time.

Often The Masters would send devotees to other Masters. Tajuddin Baba had sent numerous devotees to Upasani Maharaj. Duality exists only amongst dwarfs. The Giants work in Oneness.

People began to make life difficult for the Maharaja and eventually Tajuddin Baba realising what could happen if He continued to live in the palace, for the Maharaja’s sake decided to leave the palace. He promised the Maharaja that He would take care of him and his generations forever and beyond which was verified by the Maharaja even after Tajuddin Baba took Samadhi. He told the Maharaja, ‘Who can take Me away from you, I and My bed will be in your house for hundreds of thousands of years’, which is true, as even now Baba Tajuddin’s special cottage, called the Lal Kothi, prepared by the Maharaja for Baba, is still kept sacred and maintained to be in the same condition as when Baba was in the body.

One day Tajuddin Baba walked on a piece of land and told His people the soil on the land was good and to make a hut for Him on this land. Nobody understood the significance of this statement.

His body was failing Him or He wanted to now leave. The Maharaja sent his best doctors to treat Tajuddin Baba but nobody could diagnose what was wrong with the ailing Master. The Maharaja would come and serve Him, knowing that time was running out. Tajuddin Baba began to get weaker and weaker.

The evening of Monday the 17th of August, 1925, the Maharaja noticed large flock of birds gathered at his place but they were very silent. Extremely quiet. Close by in very humble quarters Baba Tajuddin too weak, lifted His hands and prayed for the wellbeing of all those present and those who loved Him. He then lay down on the bed and a soft gurgling sound came from His throat, and He shut His eyes and He left the battered body forever. He always considered Himself to be the servant of Allah and His last whisper was, ‘To God we belong and to Him we return’.

Far away in Pune, Baba Jaan, softly spoke to those sitting near The Master, ‘My poor Fakir, Taj has gone’, nobody understood what The Master meant. Only the next day, when the papers declared that Baba Tajuddin had taken Samadhi, did Baba Jaan’s disciples understand how close Baba Tajuddin was truly to The Master.

The papers then reported that at the exact time Baba Tajuddin took Samadhi, the statues of Lord Vitthal and Rukmini Maa, in Pandharpur, shed tears for twelve hours. Newspapers like the Madras Mail and Andhra Patrika of 22nd August 1925, in bold wrote that ‘He, who was Lord Rama, had reappeared in the world in the Soul of Baba Tajuddin Aulia and when His work was finished, He left the Earth and He was recognised’.

The King had left His body. Long Live King Tajuddin.