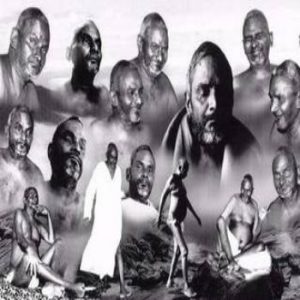 For a while a number of those who come for channeling have inquired as to why good people go through painful deaths of the body. In the next few articles I would like to cover those Perfect Ones who have passed over, many of Them, suffering greatly and dropping Their bodies, while Some have left Their bodies in mysterious ways. I would like to begin with Baba Nityananda.

The first time Baba Nityananda dropped His body was in the year 1922. It was late in the evening and over twenty devotees had assembled to meditate. Hardly had they begun when they saw Baba Nityananda in great discomfort. He had bent over and was trying to vomit and then in seconds He had left His body and in no matter of time His body began to stiffen. The news spread like wild fire that the great Bhagwan Nityananda had taken Samadhi and all through the night devotees thronged to pay their last respects to the great Master. All through the night they sat near their Master in disbelief that He had left them all without a word of warning or preparation. He was laid down on the mat on the floor with incense sticks burning, prayers and chanting taking place, when around four in the morning Baba Nityananda’s body began to show signs of movement and in a short period of time the Good Man was wide awake. After the initial shock the devotees lifted their Master and placed Him on bed and began to massage His body. When they inquired as to what had taken place and how come if He had passed over, He was back into the world of the physical living, it seems Baba Nityananda replied like always referring Himself in the third person, ‘time has not yet come it seems….nobody understands or appreciates the things He does….thus He wanted to leave the body and go….but a few sages met and told this One to go back and if the body was present why not use it….Ramakrishna was there, so was Vivekananda…’

Baba Nityananda mentioned names of five Masters who were present, making sure He returned back to His body, but in the excitement and happiness of having Their Master back in the flesh, the names of the other three Masters could not be remembered by anybody present and Baba Nityananda never spoke about this incident again.

Then nearly forty years later the time had come for Baba Nityananda to take His Maha Samadhi. In reality the preparation of His Samadhi began a year earlier and it was around that time when Baba Nityananda had given the first hint of Him leaving His body by seeking a disciple like Pundalik.

In Maharashtra there is a renowned Saint called Pundalik. Pundalik is considered to be the epitome of selfless unconditional love, where eventually even God had to go looking for Him. There are a few stories of Pundalik before He entered the spiritual fold. One suggests that Pundalik was a bully and a thug but a meeting with a Saint changed His life forever by making Him serve His parents unconditionally. The other story goes that Pundalik used to mistreat His parents but one day after an incident took place He realized His mistake and on the teachings of a Saint He began to serve His parents selflessly to pay for all His wrong doings.

Anyway, the say Pundalik began to serve His parents selflessly and unconditionally, made even the Gods envious, as many of Them realized that they did not have a disciple like Pundalik.

Thus for over a year before His Maha Samadhi, Baba Nityananda’s belly began to grow unusually huge. It is now believed that when the spiritual force collects in the third chakra called the Manipura Chakra, many times it has been observed amongst Masters that Their stomachs enlarge disproportionately when compared to the other parts of the body. But Baba Nityananda would cook up strange stories about his enlarged stomach. To some who were especially fond of physical exercises He would say that it was because His stomach was growing due to lack of physical exercises. To yogis He said it was due to breathing exercises and pranayama, that His stomach had enlarged and to some He said that all the love of His devotees was stored in His stomach and thus it kept growing.

Five months before He took Maha Samadhi He began to suffer from diarrhea which continued till His Maha Samadhi. No doctor could diagnose the real cause of the diarrhea.

Four months before He dropped His body pus began to ooze out of His ear. Once again nobody could diagnose why. The pus had no odor but no amount of medication could cure His ear.

Three months before He left His body Baba Nityananda stopped eating food and began to only consume a very meager liquid diet.

On August seventh in Nineteen sixty one, late in the evening, Baba Nityananda told His devotees that the next day He would leave His body. One of the devotees stayed back heartbroken, pleading with The Master to change His decision. He wept and pleaded to such an extent that Baba Nityananda looked at him and said, “It is possible only if a few devotees come forward and make a request; not any devotees but those imbued with desire less devotion, bhava (feeling) and prema (love)….Even one such is enough and the Samadhi will be canceled. When such a devotee is present, even God cannot take leave without his permission, or be able to disengage Himself from the bond of his pure love.”

But as expected there was not one such disciple in the thousands of devotees. Not one who could claim that he or she only loved Baba Nityananda for who He was and not what He could give. It was a sad night for the devotees but I guess Baba Nityananda must have been heartbroken, as the realisation of the fact that in the throngs of countless devotees He had no disciple who could claim to love Him only for Him and not the perks a Master could grant.

The next day, August eighth, Baba Nityananda began to gasp for breath. There was an entire team of doctors trying their best to help Baba Nityananda to just be able to breathe in peace. Around nine o’clock, The Master motioned that the oxygen pipes be removed. Half an hour later He began to breathe deeply, so deeply that His chest expanded truly out of proportion. For an hour this went on and then Baba Nityananda who had been suffering from arthritis for a while thus his legs had begun to get bent, stretched His legs. He then straightened His legs, covered His hands over His stomach, looked at everybody around and then released His soul to merge with The One.

One of His last insights into the workings of God and Masters was when He told His devotees, when asked as to what benefits would avail those who served Perfect Masters. Baba Nityananda seemed upset over such a self centered question. He replied in a soft but angry voice, “Who wants seva? Does God ask to be worshipped? It is the man who does so, to get something out of God. Go back and do your duty without desire for any fruit and without sacrificing efficiency. That is the highest seva that you can render. As for spiritual progress, the essential thing is vairagya (detachment from worldliness). Without that there can be no progress. The Ocean has plenty of water. It is the size of the container brought to collect it that determines the quantity taken.”