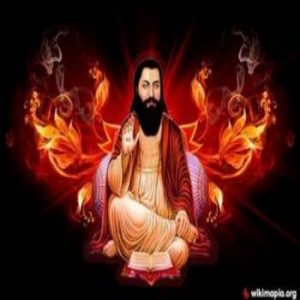 Swami or Sant or Saint Ravi Dass or Raidas (His followers today are called Raidassi and in fact have made His teachings their gospel truth and their very own Religion) was a class apart.

He was a cobbler (known in local dialect as a chamar), a profession and a caste which was considered rather down the rung in social hierarchy. Of course we are talking about those days, in the fifteenth century, much before Jimmy Choo the very famous chamar and his colleagues put cobblers up the social ladder.

So, Sant Dass and His folks were considered untouchables, and eSAven though eventually kings and royalty as well as scholars and Brahmins, prostrated themselves on the floor of His humble hut, Raidas continued to live and be supported by His profession, mending shoes, and sort of keeping head above water, body and Soul together, just about barely.

So here we have an Enlightened Soul who refused to live by the grace and gifts of His followers and continued to work mending shoes, till He took Samadhi, and the best part is that many scholars and researchers believe Sant Dass to have lived in the physical body till He was one hundred and twenty five years old and also that when He took Samadhi His body sort of dematerialized.

Sant Dass hobnobbed with Sant Kabir, the famous Sage, who is considered by many as a Prophet Himself and when questioned about which religion He followed, He said aloud, ‘Kabir’. So Raidas and Sant Kabir lived as Spiritual Brothers, Each holding the Other in the highest respect. In fact Sant Kabir considered Sant Dass as ‘The most Saintly among Saints’.

Much later Sant Dass met Guru Nanak thrice. In fact The Guru Granth Sahib (The Holy Book of Sikhs) comprises of forty one verses written by Sage Ravi Dass and handed them over to Guru Nanak Babaji by the Saint Himself.

And of course Raidas was the Guru of Meera Bai, the Krishna intoxicated child-disciple-lover of Krishna and many scholars believe that Raidas’s holy body was cremated in the compound of Mira Bai’s Krishna Temple.

What I truly like about Swami Ravi Dass is His complete disregard to everything that came between God and the disciple. Thus, for Him, one’s lineage, caste, creed, sex, religion did not matter at all where merging with the disgruntled and selectively deaf Old Man known by many as God, who went about life in general and eons in particular floating about the galaxy with a trail of harp music following Him.

All His life Raidas with dignity and humility earned a meager living as a cobbler, an untouchable, who lived in a small hut, with His wife and son. He mended shoes and was not apologetic about it.

In fact historians are of the opinion that it was Sant Dass who initiated Guru Nanak with The Naam or the importance of taking one’s God, Goddess, Master’s Name and through the chanting of The Name, one went through life, Karma, the entire scale of spiritual-astral-causal paragon and then beyond the beyond, and all this one achieved or got liberated through by chanting The Name.

He was born in a family of cobblers, who though were well off, were still considered as untouchables. His date of birth is not certain though many feel He was born on the Full Moon of February, year 1440 A.D.

Those days the caste system and exploitation of man by man in the name of caste was at its peak. But Ravi Dass through His simple devotion began to win a lot of hearts and that became a major issue with the ruling Brahmin society. They created major issues for Him and often He would be insulted, verbally abused and even imprisoned. But Ravi Dass never once doubted His own belief that The One who created everything was beyond prejudices.

He slowly began to attract a lot of influential people who had no option but to go to His humble abode to seek His blessings. Often they would hide from the world, as they did not want to be seen in the company of an untouchable, no matter how highly spiritually evolved or Enlightened His state of being was.

His life was filled with creating miracles but the greatest miracle is to make people move beyond duality, into the ocean of Oneness and to become better human beings.

One of the most famous incidents that took place was when the Brahmins complained to King Nagar Mal, that this cobbler was creating discord in society by challenging the very fabric of the social structure. The king by now was fed up to the gills with these complaints and eventually to settle the issue once and for all, He summoned the Brahmins and Sant Dass.

Ravi Dass would dress like a Brahmin but would sit and mend shoes and this created more animosity amongst the Brahmins. What they did not realise is that a Brahmin in the true sense of the word was One who was engrossed and filled with Brahma, The Creator.

Any way the King placed an idol between the Brahmins and Sant Dass and then announced that whoever could move the idol towards himself without touching the idol was obviously spiritually more evolved. The Brahmins did their stuff and the idol remained rooted to Its place. Then Sant Dass shut His eyes and said this beautiful prayer.

That my work may go wrong,

And Thou may merely watch,

Sitting at a distance…………

Kanshi is crowded with a multitude of people

Who have come to witness the assembly of devotees;

I have come to Thy shelter, O God of all Gods,

Have mercy on me, thinking me Thine Own……

With confidence in Thy Name, I have given up hope of others,

My mind finds no comfort in worldly observances,

And manifest Thy Name, the purifier of the fallen ones.

All eyes were on the idol when suddenly the idol disappeared and when they looked at Sant Dass the idol was comfortably resting on The Saint’s lap. It seems there were eighteen thousand Brahmins who were present for this spiritual dual and the King converted them all into following Sant Dass as their Guru.

But Sant Dass continued to live in his modest hut, continued to work as a cobbler, refused all gifts and tokens and money from those who came to meet Him, saying His duty was to earn His own living and God would take care of His and His family’s modest needs.

Meera Bai, who treated Sant Dass as Her Guru, used to be ridiculed and made fun of for having an untouchable, poor cobbler as Her Guru.

When She could take it no more She went to Sant Dass and offered Him a very rare and a bloody expensive diamond or some precious stone (researchers say the stone was as big as the Kohinoor diamond). She kept insisting and Sant Dass told Her, “My dear child, I don’t need it. Whatever I have attained, has been attained through My humble work. If it is below Your dignity to come to Me or if people are harassing You for coming to Me, You may stay at home and do Your devotion.”

But She insisted and placed the diamond in the thatched roof. After months She came to pay Her Guru a visit and saw Him sitting at the exact spot, working, oblivious to one and all, in complete union with His work and His God, and the blasted diamond was exactly at the same spot where She had kept it. She realised the depth and greatness of Her Guru and His love for His God and Master (Ram, Hari, Krishna) and I would like to believe that His love passed on to Her and after a while She too became God intoxicated and is now known as one of the greatest disciples and lovers of Krishna.

Sant Dass travelled the length and breadth of the country and scholars say He even travelled to parts of Arabia.

It was in one of His travels with Sant Kabir that They met young Guru Nanak. Guru Nanak was with His friend Madira, and Nanak’s father had given Him twenty rupees to go out in the world and make a good deal. Babaji met Sant Dass, Sant Kabir and three more Saints. He sat Them down and took care of Them and went back to His father saying He had made the best deal ever. I am certain Guru Nanak’s father had a lot to say about this very strange business deal.

Even now scores of people worship Sant Dass as the Messiah of the downtrodden. There is an entire new religion that considers Him their Prophet and their God. Countless Sikhs call themselves Ravidassis and worship Ravi Dass.

Ravidassis have a number of Gurudwara’s all over the country and even in the United Kingdom.

I love this poem of His the most.

“If I did not commit any sins, O Infinite Lord, how would You have acquired the Name, Patit-Pavan (Redeemer of sinners)?

You are My Master, the Inner-knower, Searcher of hearts. The servant is known by his God, and the Lord and Master is known by His servant.

Grant me the wisdom to worship and adore You with My body.

O Ravi Daas, one who understands that the Lord is equally in all, is very rare.”

He was such a simple Man that once, when His disciples told Him that a particular day was very important, and that a dip in the Ganges was considered very auspicious, He stood up to go and then He sat down, and told one and all that He could not accompany them as He had promised a man of giving the man his pair of shoes and as He had not done His work as yet He would rather finish working on the shoes than take the dip in the Ganges. Then He smiled and said, “Mun changa to kathauti mein Ganga” (If the mind is pure, then Ganga flows in the small earthen shallow pot.) And His disciples saw the Ganges flow in the iron casing in which all cobblers dip their wears and the leather and other stuff.

It is said that Sant Dass lived to the age of one hundred and twenty five years while some scholars say He lived to the age of one hundred and five years. Anyway one day Perfect Masters Kabir, Namdev, Tirlochan and Dhanna came to meet Him. They told Him that They had been Divinely guided that Sant Dass had achieved supreme liberation and that twenty one days later He would leave His body to go to His Lord and Master. Sant Dass served The Masters and They physically embraced Each Other one final time.

Sant Dass called His family members and disciples to Banaras and informed about the Divine message. Then on the twenty first day, Sant Dass after a bath early in the morning sat for prayers and meditation. With the name of God in His heart and soul He took Samadhi.

Some believe He dematerialized and there was no physical form left, while some say He was cremated in1584 (1528 A.D.)