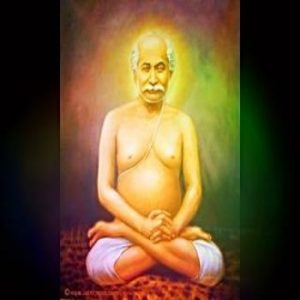 I was very young when I read The Autobiography of a Yogi, written by Swami Paramahansa Yogananda.

The sage whose snap even now makes me smile is Sri Shyamacharan Lahiree Mahasaya or as many call Him, Lahiri Mahasaya.

At a time when spirituality was considered to be the prerogative of sages and celibates; when at a time one needed to be adorned by the uniform of religion and live in the mountains; when it was sort of taken for granted that spiritual grace and evolvement was the prerogative of only those who had renounced the family, the credit card and the world; here was a Man, who humbly and silently went about life, defying all prejudices and dogmas created by spiritual dwarfs.

Lahiri Mahasaya was a husband, a father of five children, an accountant and the one who gave back to the world, the lost science of Kriya Yoga, the most ancient form of meditation, where if one immersed oneself in this particular method of meditation, heart, body, mind and soul, one could burn away all accumulated karma, collected over one’s soul journey, in one lifetime and then merge with The One; The Big Daddy. One could be free of one’s own petty self, immersed in the Oneness of all things.

Virtually all His life, Lahiri Mahasaya worked as a humble accountant in the Military Works Department, and just nine years before He took His Samadhi, did He retire from this job.

Lahiri Mahasaya reintroduced Kriya Yoga or Raja Yoga to mankind. This God given process of accelerating your spiritual growth and cleansing your karma via meditative and breathing techniques, is a gift of God to mankind. It can within years, make one reach supernatural states of realization and also make one go through life burning away karma without bearing the brunt of Karmic Cleansing. This meditation had disappeared. Apart from teaching Kriya Yoga meditation, what Lahiri Mahasaya did was He made complex spiritual issues easy to understand. What once was beyond the reach of the lay person, Lahiri Mahasaya through His inherent simplicity and humility, made all those who came to Him, understand various facets of spirituality and went to the core of the matter in the simplest of manner. He opened the doors that were earlier shut to the common man and accessible only to realized souls and those who had walked the path of Gyan (the science of yoga and life). In simplicity, I truly believe, resides The Lord.

This Man, this Yogi of Yogis, this accountant who helped you to finish your karmic balance sheet in the most calm and peaceful manner, Lahiri Mahasaya, who could materialize in various places at the same time, and still be found meditating in His humble home. He who saved the lives of innumerable of His devotees and disciples, not only from death but financial ruin, allowed Himself to go through immense tribulations.

His second son, Dukari, had an attack of insanity. One of His daughter’s who He got married, died of cholera and the other daughter became a widow at an early age and came back to live with her parents for the rest of her life. Though He had worked hard all His life, and even received a substantial pension, Lahiri Mahasaya continued to work to support His family by giving tuitions to the Maharaja’s son. Here was a King of Yogis, who could without blinking an eyelid, save scores of His followers from sorrow, death and financial strain, yet allowed Himself to go through it all, in order to show the world and all those who wanted to walk The Path of Oneness, that no matter what, if one’s priority was set on The Divine, nobody and nothing could come in the way of the one embracing The Light.

That is why Lahiri Mahasaya would always insist that all knowledge, wisdom, spiritual growth and eventually merging with The One, took place via the breath, the prana. “Prana is the origin of all power. By practicing Pranasadhana, all sadhanas can be performed. Whether you maintain a domestic existence or renounce the world, wherever you are, Prana exists within your body; meaning God is within you. If He is absent, you are non-existent. As long as Prana is alive in your body, you are alive. What is the necessity for renouncing the world when you have to search for Him in your body?”

Lahiri Mahasaya filled up twenty six diaries where He has explained His philosophies as well as written on the Indian scriptures including The Bhagavad Gita and The Upanishads. The diaries also contain normal day to day happenings and routines, which make a profound and heartwarming read. For instance, Lahiri Mahasaya would take in His tiffin to office, a little ghee and sugar for breakfast and after dinner smoke a hookah every night. He would travel mainly by boat to the Court of the King to teach the King’s son, after retiring from work, in order to keep the home fires burning.

Lahiri Mahasaya before leaving His physical body predicted that: “About fifty years after my passing, an account of my life will be written because of a deep interest in Yoga that will arise in the West. The message of Yoga will encircle the globe. It will aid in establishing the brotherhood of man: a unity based on humanity’s direct perception of the one Father.” Exactly fifty years later, The Autobiography of a Yogi was published and launched in America.

Lahiri Mahasaya fell very ill on September 26th 1895. He was surrounded by His disciples, and even then, was explaining to His disciples the meaning of His favourite verses from The Bhagavad Gita. Suddenly, He stood up and told one and all, “What am I doing here? Why am I wasting time? It is high time for me to go home, to my real home.” He then went into the state of Samadhi and left His body.

A few hours later three of His very close disciples who weren’t with Him when He left His body and thus weren’t aware of their Master having taken Samadhi, met Lahiri Mahasaya. The Lord of the Yogis had decided to pay His children a visit, even though He no longer was in the body.

Lahiri Mahasaya’s Mahasamadhi took place in Benaras, on September 26, 1895, the day of Maha Ashtami, the day for the worship of Mother Durga.