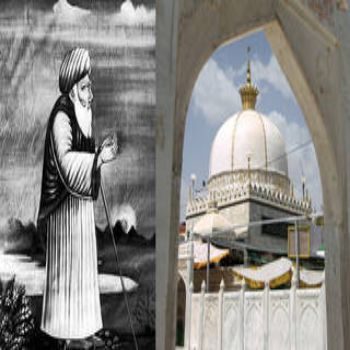 Khwaja in Persian means Master and Gareeb Nawaz means Patron of The Poor, thus Sultanul- Hind HazratKhwajaMuinuddeen Hasan Chishti SanjariAjmeri is with love known to His disciples, devotees and lovers as KhwajaGareeb Nawaz.

According to Him, the best way to worship and please God or Allah was to provide relief to the poor, the humble and the oppressed and that there was no prayer higher than the prayer of service to those in need.

Khwaja Saheb also insisted that it wasn’t just providing material comfort to the needy but also to give those who are in pain, depression and oppression a willing ear, time and consolation as well as to pray for them and do all that which is possible to lighten their hearts and free them as far as possible from anxiety and depression.

No wonder Khwaja Saheb has said that, ‘a sin committed does not harm an individual so much as looking down upon one’s own fellow human beings’.

His every moment was a prayer and every action and moment lived in prayer in motion. He believed in three things that each individual should practice apart from compassion and calm, positive, humble submission to The Friend.

The first was that one should eat less. The second was to sleep less in order to pray. When one eats less and is in the zone of continuous fasting, the body is always ready to be in a state of prayer and worship. When one sleeps one is so mired in the subconscious mind that for hours at a stretch keeps oneself away from the union with The One. The third is one should speak less as when one speaks one can get carried away, speak stuff which may not be of the Path, gossip, slander and disparage, which once again is moving away from the Path and The Oneness Family.

He believed that usually the path to The One, starts with fear, is followed by hope and then culminates with love. With fear comes the need to avoid all that which is not on the Path and thus make certain after one passes over, hell isn’t either an option or destination. With hope that one can avoid the fires of hell or creating more troublesome Karma, comes prayer and with prayer comes compassion. Prayer is usually done with the hope that God is listening and God is All Merciful and being All Merciful one can move closer to Him or Her. But all this leads to love. With love comes the need to merge with The One and this brings about more compassion, love, servitude, Friendship, meditation, contemplation and the need to spend not a moment away from The One, in this life time or the next, in the physical, in the spirit and in the beyond the beyond.

First and foremost was the search for God and to try find Him or Her in every moment and every thought, word and action.

Second was to find a Master as The Master would help the individual to move steadily on the Path and not get lost in the various by lanes of the material world and the world of illusions and duality.

Third was that the seeker respected every being, irrespective of caste, creed, religion, financial position and also that as God has created every being, each being was to be treated with love, compassion and respect.

The fourth was to be in a perpetual state of surrender to God and The Divine Will. To live a life of calm, happy, peaceful surrender and to lead a life where apart from giving your best, S(H)e knows the best and what S(H)e wants shall be for the best of the individual and thus for the highest and largest good of the individual and Creation at large.

The fifth thing which was mandatory for the seeker was to love all beings. Without love there is no God and without God there is nothing thus everything starts and ends with love. If one loves God and cannot love those who are around the individual then there is something terribly wrong. Only love can open the door of God’s heart and it is the love for all beings as S(H)e is in all beings. Thus, everything begins and ends with selfless love.

The sixth need is goodness and piousness. One needs to be inherently good and pious, and pious stands for so many things. Most importantly it stands for being inherently a good human being. One who operates not from the narrow confines of self centeredness but from the highway of selflessness and where the larger good is always paramount and the individual good if complements the higher and larger good, is only permissible.

The seventh on the list is perseverance and consistency. On the Path, if you don’t have the stubbornness of an extremely obdurate mule, where you are shamelessly stubborn as not to be waylaid from the Path, then and only then are you and me going to reach the Destination or get even close to the Destination. Thus one needs to be very clear of one’s spiritual priority and then keeping one’s eye and focus on the Destination, one holds the staff of single-minded perseverance and consistency and walks on, no matter how many times one is kicked in the teeth, no matter how often one’s nose is rubbed into the sand of time and illusions, no matter no matter no matter.

The eighth thing needed to be packed in the spiritual haversack is to be able to eat less and sleep less. Gluttony and sloth have made seekers lose their path, more than the other obvious trap holes and land mines on the path of spirituality. Every Sufi and Sage has kind of gritted Their Spiritual Teeth and cautioned the aspirant to be wary of stuffing one’s face and snoring through a land storm. There must be a reason. Both, eating and sleeping too much can make one earth bound. If one wants those beautiful wings that can make the soul soar with the Angels, one needs to go a tad easy on the food and sleep.

The ninth on the list is seclusion. One needs to be away and by oneself if one wants to go within oneself, be one with one’s breath, connect with the Higher Self, The Guru within, The Guru’s love enveloping you and to allow Divine Silence to be the wind beneath your Wings. Seclusion is a must. Be it any time of the day or at night, if one can’t go away from one’s family and responsibility, one need’s to have time in the day or at night, where one can spend time in seclusion. Being by one’s self, in thought, prayer and just being…. just be….

It was in Mecca and Madina where Khwaja Saheb while in a trace was told by Prophet Mohamed that He must go to Ajmer, in India and spread Sufism and the word of Allah.

He introduced Urdu to the world and spread Islam but mainly Sufism to all of India. He had no interest in politics or power.

When He realized that He had to depart from the body He called His chosen disciple Khawaja QutubudinBhaktiyar Kaki to Ajmer.

Just like His Master, Khwaja Saheb too handed over all that He had received from His Guru. In the words of Khawaja QutubudinBhaktiyar Kaki.

” I was called to go near my Pir. When I did so, He put His kulah (head covering on the head) and wrapped the turban with His own sacred hands. He then gave me HazratKhwaja Usman Harooni’s Asa (holy staff), His own copy of the Holy Qur’an, His musalla (prayer carpet)- and a pair of sandals and said: “These are the most sacred relics of Our Holy Prophet Mohammed which have come down to Us through the past generations of our Khwajgaan-e-Chisht (succeeding dervishes in the silsila of Chishti Saints) which were entrusted to me by my Pir-o-Murshid, HazratKhwaja Usman Harooni. Now I am giving them to You. You should prove yourself worthy of them, like Our revered predecessors in Our Order, so that on the Day-of-Judgment I may not suffer shame before Allah and our holy predecessors.”

After this, Khwaja Saheb grasped the hand of KhwajaQutubuddin looked at the sky, saying, “I entrust You to God. I have done my duty in bringing You up to this stage of perfection as Your Pir.”

Then He told His successor the most beautiful of all teachings. That a Sufi must outwardly appear as a well fed person but within He must never forget that He is poor and He should always be hungry. A Sufi must always feed the poor properly. Though a Sufi within is always sad (as He is separated from His God and Master) He must always appear happy and content with the world. And that a Sufi must always forgive those who hurt Him or who wish Him harm and must treat His enemy with love and kindness too.

When KhwajaQutubuddin intended to embrace his Pir-o-Murshid and seek his permission to depart, HazratKhwaja Saheb understood it and asked him to be nearer. When Qutub Saheb stepped up and fell down at his Pir’s feet, Khwaja Saheb raised him up and embraced him affectionately. A Fatiha was then recited and KhwajaMuinuddin advised his disciple further:

“Never turn your face from the right path of Islam and Truth. Prove yourself to be a brave man in this divine mission.” When KhwajaQutubuddin again fell down, overwhelmed with love and grief at this tragic hour of parting, He was again raised and embraced affectionately by his Pir-o-Murshid. And this was the last embrace of His life with His beloved mureed and spiritual successor.

Twenty days later Khwaja Saheb retreated to His dwelling with instructions to all that none should disturb Him while He prayed. His disciples could hear Him chant the Holy Quran. A day and a half later they could hear His voice no more. When they entered the room they realised that Khwaja Garib Nawaz had become One with The Almighty. He was then aged ninety seven. He had through His love and compassion converted nine million and more people into Islam.

On His forehead for a long while were inscribed the words in Arabic, “He is Allah’s beloved and He died in Allah’s Love.”