Why Did Baba Ask For Money? 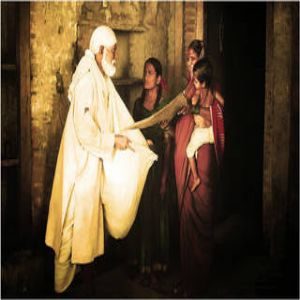 Baba in Rabda says, “I ask from no one Rabda. It is The One, The Fakir, Allah, who directs Me to ask from certain individuals and makes sure I refuse from other individuals. I need no money bachha. What will a poor Fakir do with money anyway? I have no responsibilities but that of keeping oil in the lamps, a few logs of wood for Dhuni Mai and for my tobacco. Thus, often I was not asking for money bachha but asking for other things, so more important than all the money put together in all of Creation’.

The fact is that it is only when devotees began to first come by the hundreds and then by the thousands to Shirdi that Baba began to ask for money and that too only to certain people, otherwise till then He never asked for money from anybody. It was in the last ten to fourteen years of His physical life that Baba Sai began to ask for money to ascertain various things apart from the intensity of love, faith, detachment and devotion. Each time He asked for a specific amount there was a jolly good divine reason to it.

As have mentioned in my article The Daily Routine of Baba Sai, at night He would distribute all the dakshina which He had collected to one and all present, which would sometimes come to nearly four hundred rupees, which was a King’s ransom in those times. Those days one’s monthly ration would cost less than one tenth of what Baba would collect as dakshina in one day.

He used to give fifty five rupees to Bade Baba, thirty five rupees to Tatya, seven rupees to Jante, four rupees each to Bayaji Patil and Bhogoji Shinde and then to many Sufis, Sages and beggars and also one rupee each to the newlyweds. Every night Ramachandra Patil would give Baba, four pieces of crystallized sugar and Baba in turn would give Him four rupees. He would give dakshina of two rupees to Sagun Meru Naik, whose place of honour was to offer the beetle leaf with nuts to Baba. Baba never took anybody’s service free of cost. He always paid far more than the service offered. Remember those days, two rupees was a lot of money. When He would make food for His inner circle and for those who visited Him, before the throng of devotees became a multitude, in the market Baba would haggle till kingdom come with every vendor and then come to a price and then pay the person twice the amount out of happiness.

And His regulars who got money and who knew how to take care of the money became wealthy. The money given to Tatya allowed Tatya to buy land and become a prosperous personality in Shirdi. Baba would tell one and all, ‘eat but don’t defecate’, meaning use the money well and digest the money well. Eat, means consume, but don’t shit it out, means do not waste the money on various pleasures. Use what is given well. Those who did, prospered and even now do so. Those who did not, soon after Baba’s Samadhi became paupers like Bade Baba, who it seems had developed a mighty unhealthy ego even when Baba was in His physical body.

Baba barely kept a rupee for Himself, and that too, to buy oil for the lamps and tobacco for His chillum. So the One who was richer than the Governor of India during the day, slept as a humble Fakir at night. The British authority wanted to tax Baba for His income but realised that how does one tax somebody who sleeps with barely a rupee in His pocket each night, though during the day could give all the Britisher’s a run for their money.

Baba often insisted that the devotee give him a certain amount and there have been instances when Baba has told the devotee to go and get the money even if it meant asking for a loan to give Him dakshina. He usually did this with those people who had pledged something to their Goddess, God, Guru and had forgotten about their pledge and as always Baba would ask only that particular amount which the devotee had pledged but forgotten to honour.

Baba would ask different amounts from different people and also refuse money from many who wanted to give Baba money on their own accord. He was a strange sweet darling of a God.

For instance when Baba asked for two paise or two rupees, He was asking for Faith and Patience. The same way the Holy Ash from Dhuni Mai was to teach one and all that eventually the body will become dust but the spirit and the soul would always be eternal. And Baba asking for money was also to teach one and all about detachment from what ails all of mankind, the need to amass wealth for personal consumption, rather than to share it with those in true need.

When He demanded five paise or five rupees, He wanted the child to prostrate at His feet all the five senses of taste, touch, smell, sight and hearing. If you can get your breath in control all these five senses come in control. But then who wants to waste time breathing in and out when there are so many outwardly sensual gratifications taking place.

When Baba asked for six paise or six rupees as dakshina, He wanted the six enemies of all beings, the inner lower energies that come in a pack of six, uncontrolled desires and attachments, greed, anger, jealousy, hate and ego. The six enemies who have managed to outwit and overcome Sages, Sufis, Saints, Priests and Monks as well as warriors, leaders, captains of industries, artists, scientists, doctors, social workers, and of course the salt of the earth, we the so called common man.

When He demanded seven paise or seven rupees, He wanted the individual to let go of all thoughts of the seven dimensions and the astral and causal worlds, of heaven and hell, of spirits and astral travel, and focus on the Now, the present, to give life his or her best and leave the rest to one’s Master and one’s destiny and lot.

When He sought eight paise or eight rupees, ten paise or ten rupees or eighteen paise or eighteen rupees, He wanted the person to surrender to Him all paranormal powers he or she had acquired through means that were not right or were questionable. These powers are called SIDHI’S. There can be eight SIDHI’S, or ten SIDHI’S or all put together eighteen SIDHI’S and if the individual is not pulsating with Oneness and to serve Goddess, God and Guru only, but to serve himself or herself and fan his or her ego and thus the powers are being used or were going to be used not to spread Light and Compassion, but to avail oneself of power and heighten one’s greed and thus hasten the individual’s descent into the bowels of hell, all the while hurting and cheating innocent people and breaking their trust in the Goddess, God, Guru and the purity and sanctity of the Path, then He wanted the surrender of all those SIDHI’S and intentions. He believed that it is better to face agony and misfortune than to court these lower powers and SIDHI’S, because such powers are like an individual who has no reason of either poverty or other circumstances, but still trades his or her body as a prostitute out of sheer desire to earn quick money, though s/he can earn through hard work, and thus uses the body to entice and become rich. Baba warned us all to avoid such powers as that is a sure way to the worst possible hell ever created by God in His benevolent wisdom.

When He sought nine paise or nine rupees He wanted the child to lay down the hold of astrology and nine planets and the influence, positive and negative, the nine planets exerted consciously or subconsciously in the child’s life. The planets shall do Their work based on one’s Karma, but always remember, selfless prayers, meditation, compassion, charity, and most important the grace of Goddess, God, Guru can perform miracles, that go beyond all planets, astrology and predictions. Nothing is impossible for The One, thus respect the planets but to be obsessed or fearful of Them does not speak much for the child’s faith in his or her own individual capacity and potential, and also does not take into account the power of The Beyond, which is far beyond the influence of planets and all the lines on one’s palms and in the cards.

Sometimes Baba would ask for fifty three rupees but very often would never take that kind of money as it was beyond most people’s capacity to give but by asking for anything to do with fifty three He wanted the individual to read the Guru Charitra which comprised of fifty three chapters. And as mentioned before, when Baba lay down for the night, He had dispersed virtually all the money, keeping a rupee to buy oil for the Lamp, and tobacco for His chillum. That’s it. The One who earned more than fancy British officers and high ranking individuals during the day would sleep at night like a Fakir.

As Baba says so often in Channeling, I need nothing but true selfless love, joyous surrender and faith. Beyond that what can anybody give Me.

Masters are not concerned about personal glory or fame or adulation. Whether we are aware of Their existence and presence in our life or not, does not matter to The Masters. They work, help, heal, bless and take on the suffering of Their lot silently.