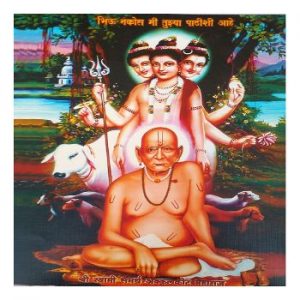 Not many are certain where and when Swami Samarth also known as Akkolkot Swami, was born. Like Sai Baba of Shirdi, His birth and time are a mystery and there is a lot of conjecture. Swami Samarth too spoke rarely about His birth. He is considered as an Avatar of Lord Dattatreya and many consider Him to be the Avatar of Shrimad Narasimha Saraswati who is also considered to be the Avatar of Lord Dattatreya.

Legend states that when a woodcutter cut a tree, blood started to ooze out of the tree and from the tree ventured forth a tall man with big ears and hands that extended way beyond His knees. This man was Swami Samarth. The woodcutter, I presume, nearly passed out and began to profusely apologise to the Saint. Swami Samarth consoled the man that this was meant to be. He had to be awakened to resume His new Avataric journey.

He performed innumerable miracles from bringing people alive back from the dead to curing of illnesses, to alleviating people from poverty, drudgery, pain, hardship, and from the clutches of destiny. Swami Samarth is considered to be the Guru of Shankar Maharaj, Gajanan Maharaj and Junglee Maharaj.

In fact, Sai Baba of Shirdi’s fame grew tremendously only after Swami Samarth took Maha Samadhi. It is said that when Swami Samarth who had settled down in Akkolkot for over two decades, had decided to drop His body, a number of His devotees and disciples were heart broken. They besieged Him not to leave them and forsake them. Through direct words and dreams Swami Samarth reassured His band of lovers that He would not leave them stranded and who ever wanted His darshan should go to Shirdi as He would reside with the Sai of Shirdi. In fact days before Swami Samarth took Maha Samadhi He guided one of His disciples to worship Sai Baba of Shirdi, stating that henceforth He would reside in Shirdi.

To another disciple, named Keshav Nayak, who besieged Swami as to who would give them protection henceforth, Swami Samarth first gave him a pair of His is sandals or Padukas to worship and told him that henceforth ‘I will be staying at Shirdi in district Ahmednagar’.

When Swami Samarth took Samadhi, His disciple, Krishna Ali Bagkar, decided to go to Akkolkot and worship the blessed sandals of Swami. That night he got a dream where the Swami told him that, ‘Now I am staying at Shirdi, go there and worship me’. So Krishna went to Shirdi and stayed there for over six months. When he decided to leave, he had to take permission of our Sai and our Baba told him, ‘What is there in Akkalkot, Maharaj is staying here now’.

Legend says that Swami Samarth took Samadhi, His soul split into two halves; one part merged with the banyan tree under which Swami sat, which is now worshipped and the other half merged with Sai Baba of Shirdi.

One must understand that before Swami Samarth took Samadhi, Sai Baba of Shirdi was considered by most orthodox Hindus as a Muslim and a fakir. Thus most Hindus from outside Shirdi would not go to take His darshan due to their religious prejudices and parochial mindedness. It was after Swami Samarth, who was revered by countless Hindus, made this revelation that throngs of Hindus began to frequent Sai Baba of Shirdi, after Swami Samarth left His physical body.

Swami Samarth began to talk about leaving His body over a year before He really dropped His body. Most often nobody paid attention or did not want to accept the fact that He would leave His body. Once while smoking the hukka, Swami Samarth asked his disciple, Balappa, ‘we have to go a very long way and reach heights, would you like to come to serve me?’ Sometimes Swami would turn the lamp upside down or roll His bed and hang it on a tree. It is also said that Swami Samarth missed His disciple Cholappa. He missed him so badly that certain researchers insist that because of the absence of Cholappa, Swami Samarth could have hastened leaving His body.

The relationship between Swami Samarth and Cholappa is interesting. When Swami Samarth arrived in Akkalkot, a few Muslims recognized the divinity in Him. But those days social norms were stringent and downright crazy, thus they advised Swami Samarth, who stayed in a Khandoba Temple to go to a Brahmin’s house. Some say it was a Commander of a cavalry who first mistook Swami as a person not quite right in the head but in moments realized His greatness and told this man called Cholappa to prepare a meal for Swami. Henceforth Swami began to stay at Cholappa’s house. The latter from the start took Swami as a great Sage. He had no two doubts about this.

From then on, Swami started staying with Cholappa in his house. Cholappa served Swami with all His heart and obeyed every word of His. He was a poor man but would make sure Swami was most comfortable. Swami would take repeated tests of Cholappa by troubling his wife, Yesubai and his two kids. He would really trouble the family just to test Cholappa and the latter’s wife was certain that Swami was a mad man and her husband had gone equally nuts to worship such a mad man but Cholappa was firm about his love and faith for Swami. One day Swami Samarth decided to leave Cholappa and his overjoyed family. Cholappa followed and Swami abused him and did all He could to dissuade the man from following him but to no avail. Won over by his devotion, Swami Samarth removed His sandals or Padukas and gave them to Cholappa and told the man to worship them.

So Cholappa began to worship the holy sandals or Pakudas of Swami Samarth and others nearby too began to worship them and their problems began to disappear and they began to give Cholappa small donations in cash and kind. The king of Akkolkot too became a devotee of Swami and he too began to provide food and necessities to Cholappa and the sum of five rupees, which in those days was a reasonably good amount. Swami would still trouble Cholappa and his family but Cholappa was firm in his faith and his faith is what won Swami over. As time passed it is said that Cholappa made thousands of rupees in the name of Swami and after a while even Swami got fed up of Cholappa’s greed. One day Swami prepared a cloth bag and asked all those present to make donations into the pouch. When a sum of one hundred and twenty five rupees was collected Swami threw the pouch towards Cholappa and told him, ‘Take this money, now I am free from your debts’. Cholappa was soon removed from the active service of Swami though he would still come to pay his homage to Swami. Now Cholappa was a rich man and though his greed had got the better of him, his love for Swami remained. When Cholappa’s body was dying Swami visited him during his last moments. He was heartbroken when his friend and devotee breathed his last but Swami said, ‘We were associated with each other for the past seven lives and today I am freed from that bond’. But His love for Cholappa remained till the end and the beyond. Even today Swami Samarth’s body rest’s in Cholappa’s house, which was reserved by Swami when He was still in the body. This is the love He had for Cholappa.

Eight days before His Maha Samadhi Swami Samarth began to sing hymns in the praise of Lord Shiva. Soon thereafter He began to suffer from acute dysentery. His health got worse and He completely stopped eating food. His body raged with high fever and ached tremendously.

Though weak, He went and sat in the Jangam Muth in Akkalkot, where is installed a huge Shivling. Swami told the caretaker to bring many cow dung cakes and lit a fire. He fed the sacred fire ten pounds of clarified butter, rice, dates, fruits and other items which He had been gifted by His followers. The devotees of the Temple became upset with Him as they did not understand or appreciate the need for starting a huge fire right in front of Lord Shiva’s Temple. Though Swami Samarth was the Lord and Master for innumerable people, there were still many who questioned His divinity or His actions. Though many were upset with Swami they kept their mouths shut as the last thing they wanted was Swami Samarth losing His cool. He was known for His quick temper and volatile language. The fire burnt on scorching the statue and the walls of the Temple. The entire place was filled with soot, the Linga and the walls were covered in soot and had become black. The next day, Swami Samarth instructed all to clean the Linga, and to their surprise the Linga shone brighter than ever. It is said by many scholars and researchers that this was Swami Samarth’s way of telling one and all that even raging fire cannot destroy one’s soul and higher self.

But Swami’s health kept deteriorating. When somebody asked Him when He would recover, He softly said, ‘How can I become alright? Time has come for me to depart from this world on my final journey’.

The best doctors from every medical field were called to treat Swami but Swami would not cooperate with any. He began to grow weaker. When asked when would He get alright He said, ‘I would get alright when the mountains speak’ or ‘I will get up when Pandharpur burns’.

But through those days Swami Samarth was completely conscious of every minute detail that transpired and continued to bless all those who came to meet Him. On April 30, 1878, Swami Samarth ate two morsels of rice-gruel. He lay on bed for a while. Everybody realized His time in the body was coming to an end. His body shone bright and there was a kind of joy in His eyes. Then Swami with the help of Sripad Bhat sat in the lotus position, took a deep breath, shut His eyes and went deep within Himself and dissolved His spirit with the Great Goddess beyond.

Cholappa’s house was the final resting place of Swami Samarth with Swami’s consent. This was the first place He had resided in when He had come to Akkolkot and this would be His resting place for all of eternity. Even today His famous words of reassurance resound within the hearts of all His devotees and disciples. He would always say, ‘Bhiu nakos mi tujhya pathishi aahe’, meaning, ‘Do not fear I am standing right behind and beside you’.