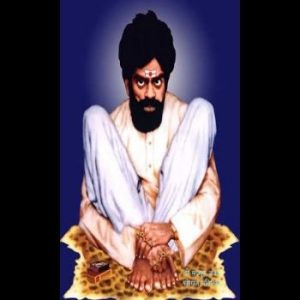 Shankar Maharaj would smoke a particular brand called Honeydew (known as Pilo hatthi) cigarettes. He often appeared intoxicated due to the consumption of brandy and loved the smell of henna perfume or ittar.

So, who is Shankar Maharaj, the One who lived in the body till around the age of one hundred and sixty one, who spoke any language immaculately which He was addressed in, be it English, Russian, Japanese, Hindi, Marathi, Urdu, who could converse with animals and birds, whose body was broken in seven different places, who loved smoking and carried a brandy bottle with Him and most importantly loved His Guru, Shree Sadguru Swami Samarth so much that He would often sit at Swami Samarth’s Samadhi for hours at a stretch and tell one and all, that He, Shankar Maharaj performed no miracles, that all miracles that happened through Him was due to the Grace, Love and Compassion of His Guru, Swami Samarth.

Like Sai Baba of Shirdi, Shankar Maharaj was followed by both, Hindus and Muslims in India, and is known as an Auliya by Muslims and an Avadhut by Hindus (both meaning a Man of God with supernatural powers) but the strange part is that He spent time in Russia, Japan and England and has followers, who are Christians and Buddhists too, all over the world.

Shankar Maharaj was short in stature, around four feet six inches and was bent in eight places in the skeletal. The yogic word for this is Ashtavakra. He had long hands which reached below His knees, which is the sign of an extremely evolved Master in the Naath Panthi sect, also called Ajunubahu. He used to talk with a lisp which He said was due to His unusual long tongue. His eyes were childlike and He kept changing His appearance. He would sometimes wear the fanciest of clothes with a gold chain and a watch and live in the most affluent places and sometimes He would be clothed like a mad man, unkempt, or mostly in the traditional Indian attire of villagers, dhoti and a simple white shirt, living in the most humble surroundings. He used the choicest of abuses, thrashed folks and if this wasn’t enough, sometimes walked about with a well made hunter or whip but Compassion personified. He once thrashed an eve teaser with the hunter. He also had difficulty in walking due to being bent at eight places in the skeletal, thus often His disciples would carry Him, but when He needed to, He would walk fast and leave all the others behind. He was an enigma. He wanted His children to go beyond His physical form, behavior, attitude, speech and focus on His Oneness with The Master and The Lord. Time and again His disciples realised that He could change His look and appearance as well as His agility and state of youthfulness, depending upon what He wanted to convey.

About His drinking habit, once He had told His disciples that He did not want to be surrounded by anybody who wasn’t interested in moving on the path of liberation and Spirit. Thus, He wanted only those who were beyond the perception of what a true Master is. He would help those who were struggling to keep body and soul together no matter what, as if the body is hungry, the chance of moving on the Path doesn’t arise. But those who had it all but wanted more and more wealth or name or fame but not give back to the society and the poor and the needy and be immersed in the false illusion of ‘I am the body’ senses, He kept away from. Thus, He often behaved in a mad manner. He abused and thrashed and drank and seemed mentally unsound. Also, often when He drank and if He was being judged by others around Him, invariably those chaps got intoxicated. Often when people took a sip from of His brandy bottle, they found it was coconut water but the moment they would put the glass or bottle down it was brandy.

He used to meet Hazrat Baba Jaan and Fakir Baba often when in Pune and was well versed with The Quran and spoke in detail with Muslim devotees about the true meaning of The Quran and He also spoke to them in Urdu.

Often He would rue that everybody seemed to be after happiness but nobody truly realised that happiness comes forth from avoiding all that which brings unhappiness. “Everyone in this world is after happiness. But nobody bothers to think about what really is happiness. Unfulfilled desires, jealousy, greed, ambition etc. create sorrow in our life. Eliminating them can alone create happiness in our life. It is a mistake to think that happiness can be obtained by external things without getting rid of our internal shortcomings. Reading various kinds of philosophies can only create ego. We have lost the ability to think independently. We have forgotten that happiness and peace are to be obtained through one’s own efforts.”

The first time He wanted to drop His body was in the late 1920’s early 1930’s but due to the immense love He had for His children, especially Dr. Dhaneshwar, He postponed the time of taking Samadhi for seventeen years. The script of His final Samadhi could have been written only by God, Goddess and The Master Himself.

One day, around the beginning of April in the year nineteen forty seven, Shankar Maharaj told His disciples that He wanted to visit Maa Padmavati’s Temple in Pune. He went and sat in front of Maa Padmavati’s Statue and for a long time He gazed at Her; it was as though both Mother and Son were in deep conversation with Each Other. Then He got up and smiled. The smile should have told His close disciples everything. Seventeen years had passed and He had promised His disciples that He wouldn’t leave His physical body for that period. He asked to be taken to another disciple’s home, family of Malpani, who had a farm near the Katraj Ghat. Shankar Maharaj entered the farm, drank water from the well and then smiled once again and told those near Him that, “Use this place for My Samadhi. This place is blessed with the company of Saint Dnyaneshwar and Goddess Padmavati. I will sleep here forever. When our clothes become old and turn to rags, then we change them. In the same manner My body has become old. So My Soul is going to change the body. The golden chance to be in Samadhi for a Yogi, Saint or Ascetic comes every seventeen years. Now the chance for My self immolation is coming on Vaishakh Shudh Ashtami, on the twenty eighth of this month and this year (twenty eight April, nineteen forty seven). On this day I shall take Samadhi.”

Four days later after meeting His closest disciples, after having a cup of tea but not smoking His cigarettes, which were so close to His heart, He had a bath, made arrangements for an old huge cupboard to be cleaned, a mattress and pillow to be placed within the cupboard. He made it clear to all present that nobody should disturb Him or try to open the cupboard. He would inform one and all what to do as and when the time was right.

For the entire night there was no sound from the cupboard into which Shankar Maharaj had retreated. Then in the early hours of the appointed day for Samadhi, the spiritual sigh of Omkar came through and then those outside heard Him tell one and all that He had left His physical body and to make the necessary arrangements for the final resting place of His body. Thus, on Ashtami, which is considered to be the most auspicious day of each month for all Goddess worshippers, Shankar Maharaj, Lord Shankar left His body.

Now Shankar Maharaj had taught His disciples certain spiritual truths and they decided to see if a particular spiritual experiment which He had taught would come to pass. A copper wire was placed on Shankar Maharaj’s throat and the other end touched the disciple’s ear and then a voice came loud and clear through the wire that said, “My Soul has left this body and got united with Almighty God but I will work through my Samadhi for the welfare of My devotees”.

During the final ceremony when His body was lifted to be placed in The Samadhi Temple, one of the four disciples by the name of Mr. Phulari was nudged by Shankar Maharaj and told clearly that, “Hold my body properly or else I will fall”. When Mr. Phulari looked around He saw Shankar Maharaj’s body in the state of Samadhi but also realised that in his grief, in a matter of few steps he would have been responsible in making His Master’s body fall on the ground.

Once again when the disciples were filling the Samadhi Tomb with sand, they realised that no amount of sand could fill the tomb when just then another disciple was told loud and clear that, “Gather used flowers from the temples of Alandi, Jangli Maharaj Samadhi, Sopankaka Samadhi, Omkareshwar Temple (Pune) and Goddess Padmavati Temple and put the flowers on My body”.

The best part is that time and again Shankar Maharaj has materialized His body and met a number of His disciples. Sometimes had a meal and sometimes asked for cigarettes and with a smile disappeared.

The fact of the matter is that for The Masters, this business of materializing at various places, resurrecting Themselves, performing miracles is child’s play. The real deal is to fill each disciple and devotee’s heart with the realisation of Oneness, thus making each one of them more compassionate, selfless and operating from brotherhood. That is where the real deal is, that is where the true miracle is, that is what each Master, Saint, Prophet strives for; first to make each one of His or Her child become a more compassionate, less judgmental human being and later on realise The Eternal Guru within and then become One with the Eternal Guru. To perform this miracle They keep coming back, denying Themselves eternal rest, bliss and merger.

The real miracle is The Love and Faith and Compassion They have for us. And we continue to look up and spit in the air.