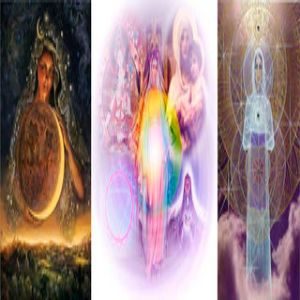 Jesus, The Son of God, came through mother Mary. As the Mother was chosen to bring The Lord’s Son to mankind and all of creation, similarly, without The Mother it would virtually be impossible to reach Jesus The Christ.

Immaculate conception or not, the fact is that it was divine Mary, who was chosen to nurture The Son, within Her womb, make sure the child was protected and to prepare The Son to go out into the world to spread The Lord’s Divinity, Compassion  and Radiance.

The fact that it was Mother Mary who was chosen to be the vessel through whom The Son of God could manifest physically and then spread The Word and then allow Himself to be crucified to take on the suffering and the ignorance and the sins of all creation, should show us all the importance and the Divinity of The Mother.

Who so ever wants to reach Jesus can only go through The Mother.

I do not wish to dwell on the Immaculate Conception of Jesus. How does virginity define Divinity? How does it matter? A mother is a mother. Does a mother’s love become less in intensity or purity because she did bring forth her child through Immaculate Conception? Does a child’s love for the mother get tainted as the child came through the normal laws of reproduction?

I really do not see the point in getting so caught up with this whole reproduction aspect of The Mother and Lord Jesus. It truly makes no sense. The fact that Mother Mary was chosen to be The Mother of The Son of The Lord itself should get us on our knees in silent obeisance and prayer.

She is the Chosen One and one can only hope to reach Heaven or The Lord or The Son or The Prophet or even the doors of Heaven only through the Grace of The Mother, whichever name and form you worship Her.

The most important aspect of the divine Mother is the silent manner in which She goes about playing Her Divine Role. Be it in the form of Kundalini Shakti or the silent, humble manner in which Mother Mary gave birth to Lord Jesus; nurtured Him and then became His disciple.

First and foremost, remember Christ is the God Consciousness-Realization- -Oneness-Energy in Jesus. For a moment when Jesus The Christ was being crucified, the man energy became predominant, and Jesus, bereft of God Consciousness for those few seconds, as the physical pain must have been terribly excruciating, cried out to God, ‘ Oh Lord why have you forsaken me’. That was Jesus the man crying out to God, pleading God not to forsake him but after a while when He allows Himself to be filled once again with God Consciousness and Oneness, the same Jesus, suffering on the cross, says ‘ Lord forgive them for they know not what they do’. This was said by Jesus The Christ.

The God energy in Prophet Mohamed is the Divinity in Him. When Lord Hanuman told Lord Ram that ‘ oh my Lord, in the physical plane I shall always be your disciple and servant and sevak but in the spirit plane we are One’, He referred to the Oneness of God Energy in Lord Ram. Remember, Lord Ram, did not know He was the Avatar of Lord Vishnu. Otherwise do you think anybody could have taken away Goddess Sita by force? Baba Sai of Shirdi and The Perfect Masters would always say ‘All is done through God, Allah, Ram, The Fakir’, but when The Masters were filled with God Energy or the Christ Consciousness, then They would say ‘I am God and God is me’. And when They would return to Their state of Consciousness, They would once again only talk about Themselves as the servant or slave or child of the Lord.

So, till Mother Mary nurtured Jesus the infant, Jesus the boy, Jesus the growing lad, Jesus the man, She was His mother. The moment Jesus became self-realized and became filled with the Christ Energy, Mother Mary, became Her own Son’s Disciple, as now She became the disciple of Jesus The Christ; Jesus Filled with God Oneness.

A mother always wants her child to soar. She then stands in the shadow, seeing her energy and Shakti, work through her child, and often from far, even like a stranger, she watches, filled with pride and love, as the world acknowledges her child but not her; acknowledges the body and the not the energy that works through it.

Mother Mary thus stood in the shadow, seeing Her Son, filled with Her Shakti and The Oneness of the Lord, soar. She stood in the shadow, as a disciple, while all the attention and the glory was but naturally directed towards Jesus The Christ. The important aspect of Mother Mary’s divinity is that The Goddess took birth as a mortal, and and thus She experienced anguish, pain, humiliation, depravation, and the heart break of seeing Her Son be crucified so mercilessly. The Goddess, took the form of Mother Mary, lived as a human and thus knows what it is to FEEL NORMAL HUMAN ANGST, PAIN, SUFFERING.

Thus, it is through Her, the Mother Goddess, who you may call by whatever name, our prayers reach out to The Son and to the Gods and to the Trinity and to all of the Oneness Family.

The Mother or Goddess, came down in human form, as Mother Mary, lived amongst us as a mortal, called Herself the Slave of The Lord, allowed Herself to become pregnant with The Lord’s energy in the form of Jesus, at the age of fourteen or fifteen, knowing very well that the world and Her family would give Her grief, but silently allowed The Son to be nurtured in Her womb. And then when The Son, was filled with the Christ Energy, allowed Herself to step back in the shadows, to be considered as one of the many disciples of Jesus The Christ. Saw Her child mercilessly and ruthlessly allowing Himself to be crucified and she quietly accepted Her own Son’s direction to go home with the Apostle John (John 19:25-27) and calmly understood when Jesus again addressed her as “woman.”

The way Mother Mary was chosen to give birth and bring about Jesus The Christ to mankind, similarly, it is once again only through Her (Shakti-Goddess Energy) that mankind and our prayers and woes and pleads, can reach Jesus The Christ and The Lord, The Trinity ( also known as Shiv, Vishnu, Brahma).

It is through the Kundalini that God Realization can come about. The same way it is only through the Goddess, name Her what you want, can one bring about God Consciousness and Realization within.

Mother Mary is the Kundalini Shakti, who lived as a normal human being, knowing what mankind goes through. Pray to Her. She has lived amongst us. She understands our pain, our struggles, our needs, our attachments, our sorrows. Who else will understand sorrow better than a Mother who has seen Her Son crucified so mercilessly. She knows what pain is. She knows what human frailty and attachment is. She has walked amongst us. Hold Her hand and She will take you towards Her Son, Jesus The Christ.