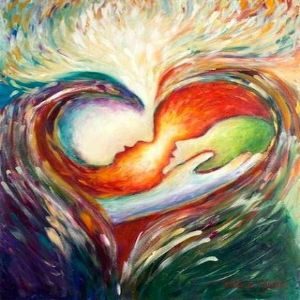 So how does one live in the world and yet be above it. The laws of Karma are as akin to breathing. Every thought, word, action, intent, creates karma. The Sages, Masters, Scriptures, all insist that only the one who goes beyond karma can truly be called spiritual and move forward in the spiritual journey and not dwell in the sewage but reach the pinnacle of that illusive mountain.

So we go back to what Lord Krishna advocated when He told Arjuna that the one way to go beyond Karma and Maya or illusions is do your duty whole heartedly without thought of gain or fear of consequences. So if you help a person with some money because you feel he is hungry and you want him to eat something, there is no Karma created. And let us assume there was Karma between him and you, by you giving him the money selflessly you have balanced the Karma and if there was no Karma between you and him, by giving him money out of compassion and selflessness you have not created any new Karma. But if you give money and you expect a blessing or you expect your Master to smile, or want praise or any sort of gratification then you’ve begun Karma with that person.

Now, that so called act of charity too can become very heavy ten lifetimes down the line. So what your intention is when you give the money is going to be very important. When we go and do seva of people suffering from some illness or we serve the needy, what is our true intention, that will decide the Karmic give and take between the individual and us. There should be just love and compassion and seva for the sake of love and compassion. Then miracles start taking place but if we were to do something for even Grace or a Glance from The One, we have started a chain of Karma.

I think the sages went off to the Himalayas to get out of the Karmic band wagon. Least impact. Not because they enjoyed it, but because they knew that this was the most convenient and hassle free way to shed off all Karmic give and take and mainly not create more Karma and bondage. Yes am sure vibrations and silence and all that spiritual stuff which these sages are so obsessed with too must have been considered but I am kind of certain They could have worked out the environmental issues without going to places which google maps don’t cover and freeze their family jewels. They are Sages and Sages are supposed to be able to meditate anywhere. If you can meditate in minus twenty degrees wearing a cloth that could give Victoria Secret models a complex, why can’t you meditate in some place more hospitable? The only reason why they trekked and located some dingy cave and converted it into their one bedroom-hall-kitchen, according to me was that, they were certain that if they lived amongst mankind, they were going to get sucked into Karmic ranubandhana; the Karmic give and take. Perfect Masters were beyond all this thus They lived amongst mankind and went about Their lives creating no Karmic bonds and even if They did, They did so for the wellbeing of Their flock and were prepared for the Karmic consequences.

When the Karmic scales get balanced and if you and your driver, both have not complicated the Karmic equation, then separation takes place. This is applicable to everyone. Friends, who you could not live without, now for decades you have not seen them, not thought of them, not taken their name. What happened? They were people you could not live without. You could fight the whole world for them. One fine day the tug had gone. It is the sand of Karma which had got cleared out.

Even God is governed by time. Kalki, the Avatar of Lord Vishnu, who is eagerly awaited by millions of Vishnu devotees, is supposed to come at a particular time. That means even God has to wait for that opportune time to make His or Her presence be felt. The time has not come. So Kalki has not made His presence felt.

Often we wonder why after doing everything yet nobody loves and appreciates us and somebody else who doesn’t do anything gets valued and cherished. The reason is simple; there is a give and take between individuals and if you have to give and have none to receive in your Karmic balance sheet, then all you will do is give and not even get a word of thanks; while if you have to receive, you will not move a finger and still receive and get all the credit. The Karmic bonds have created such situations, for our highest wellbeing but in the human body, we won’t recognise what is best for our spiritual growth even if we are given a rather harsh, thorough and unhurried colonoscopy.

I know many who have not come with the destiny of being appreciated. No lena (receiving) only dena (giving). They are taken for granted. They do everything but nobody acknowledges their work or their presence. So we start doing the best think we know and are capable of, evaluating, analyzing, thinking that something is wrong with us, we are wrong, we are not worthy, rather than understanding that beyond doing our best and with the purest of intentions there is nothing more that we can do. Even God has failed to make one and all happy, so how on earth are we supposed to succeed where the Lord Almighty has not succeeded.

The moment one starts brooding about stuff which are not in our control, the moment one starts thinking and whining and crying, we have started a new chapter. Those who play the victim card, those who suffer from the victim syndrome, are making certain that their Karmic give and take with an individual, a group or generally with the world at large, is going to take eons. Also by playing the victim we negate all our responsibilities towards the situation and put everything on somebody else’s shoulders. The blame game triggers more give and take.

So the DNA Karmic blueprint is ultimate; it goes beyond astrology, it goes beyond everything. It is so complex that only a sage would be able to unravel the knots. But this blueprint is self regulatory and self modulating. Our place under the sun, is to go about life giving one’s best and leaving the rest to The One. How do we mere mortals, unravel or even understand the grand workings of The One when we can barely understand our own selves.

So I believe the important thing that we need to keep in mind very clearly is, neiki kar, dharm kar, punya kar, aur kuay mein daal (do your duty, perform good and pious deeds, and then don’t do mental math, forget about it all, chuck it all into a well). That Well is the Well which represents Maya, which represents Karmic give and take. You are letting it go, saying ‘I am not the doer just Your instrument and I put it all at Your Feet, you do Your math, You do what You want, just let me hold on to Your cloak or daman and be Your shadow’. The more we realise the importance of the Well or of letting go, the lesser will be the grip of Karma on us. When life becomes simple and we go about doing our dharm (duty), karam (work), neki (good deeds) without any mental math and accounts, without any agenda, when we do all this and live like this then I think the true journey begins. God is a terrible business man. Pathetic. Avoid doing business with ‘God and God Private Limited company’. Harsh buggers. S(H)e is best as a parent and a nurturer. Approach The One like a child. Never an adult. They don’t take to adults very kindly.