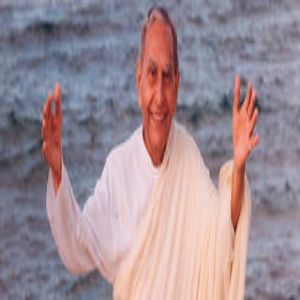 It is difficult to write about Dada Vaswani in the past tense as for me He shall always be around, guiding us in His childlike manner, humble, filled with humour¸ His mischievous eyes, the most divine smile and most importantly, His kindness.

The first time I met Him, His shyness came forth. I touched His feet and nearly passed out when He tried to touch my feet. Dada was like this with everybody. In every note He wrote to me He would end by seeking blessings. This was His humility.

Humility is a strange word in today’s world. I have known people who wear humility like a badge, something to be proud of. It’s like saying they in reality have pride in their humility. Our world is a strange place and the inhabitants are getting stranger.

But not Dada; His humility came from the very depth’s of His being. He did not try to be humble, He was humbleness personified. I have never met anybody as divinely humble as Dada Vaswani. I don’t think I shall ever meet another like Him.

The few months that we interacted with each other, every other day, I have witnessed His love, care, kindness and humility towards everybody. I felt He was not from this era or this world itself. He was immersed in His Guru, Sadhu Vaswani and even the last time we spoke, only His love for Sadhu Vaswani came forth. Every time I spoke to Dada, His love for His Master was so pure and sublime, that Dada disappeared and Sadhu Vaswani emerged. He truly is a perfect disciple as even now where ever in the heavenly abode He resides, I am certain that He resides as a disciple of Sadhu Vaswani.

The first time we met, after a brief conversation, I had to tell Him that Dada ‘I am supposed to write a book about You and Your philosophy. You can’t possibly answer every question of mine with Sadhu Vaswani knows best. I can’t possibly fill three hundred pages with this ideology.’ I remember He looked at me as though shocked why couldn’t I fill the entire book with this philosophy of every question inquired into with the answer, ‘Sadhu Vaswani knows best’.

The next time I met Him was in the Kutiya, the room in which Sadhu Vaswani spent a lot of His last physical days. Dada smiled and when He smiled His eyes twinkled.

‘I am happy to see you Ruzbeh. I have begun to go through The Fakir. The title is so beautiful, it reminds me of Sadhu Vaswani’.

I groaned. Please don’t get me wrong. I loved His love for His Guru. I wish I could be so surrendered to Sai Baba of Shirdi as He was to Sadhu Vaswani but as an author I really was in a jam. How were we ever going to get a book done?

The first day of the interview I entered the Kutiya and once again nearly passed out. The beautiful, humble, room looked like a set from a movie. It was all done up, with this large curtain behind and my heart sank. Then Dada was wheeled in by Krishna, who has dedicated her life to Dada and He looked at His beautiful Kutiya all jazzed up and then He looked at me and must have seen me disheartened and a twinkle entered His eyes. We sat down and then He leaned towards me, the twinkle never leaving His eyes.

“I thought it would be a bit more informal,” He whispered.

“Dada, look at me, I am dressed in torn jeans and I am unshaven. That is how informal I thought it was going to be.”

“For a while I felt we had entered a Hollywood set.” He spoke and we both began to chuckle like two small kids.

“Tomorrow I will make sure all this disappears. Just cameras and basic lighting.”

“Yes. That would be good. I got scared coming in.” We both began to chuckle again. I guess we didn’t want Krishna or Piya to get upset.

The shoot went well. He was still shy and I wasn’t too happy as I knew He could have spoken more but His humility came in the way.

Every time we met, Dada made sure that there was some Prasad in the form of chocolates, biscuits, wafers, blessed by Him, for Meher, my daughter. Not once have we met and has He ever forgotten. Not once. Not even when He was visibly unwell. He would look at Krishna and tell her to get the Prasad for Meher. This speaks volumes for the love and care He had for each and every body.

Everytime I would go to meet Him, first I would pay my respects to Sadhu Vaswani and Sister Shanti, at Sadhu Vaswani’s healing and calm Samadhi. One day I told Sadhu Vaswani that ‘I know Dada is Your disciple and You are His Guru and humility is most important but for God sake, I can’t write a book, a true book, if He doesn’t open up. Please, please, please, in some way tell Your greatest disciple to open up and speak His heart out. I beseech You, Sadhu Vaswani.”

I entered the Kutiya and for some reason Dada was delayed. He then was wheeled in and Piya got Him ready with the mike and making sure that there wasn’t a crease on His shawl and I sat by His side and it was then He looked at me, deep into my eyes.

“After many many months Sadhu Vaswani made His presence felt and He told me that you had been complaining to Him about me not speaking in detail. So I shall try to be more forthcoming. I don’t want to make Him upset with me.”

And from that day Dada began to open up and He divulged more openly about His views and His philosophy but never about His powers or His spiritual greatness. He was always silent if I ever probed Him to reveal mysteries of the other realm that He had experienced.

He never referred Himself as a Master. He would often tell me, ‘all these things the Masters can do, we can’t’. Once He said, ‘the Masters have all emotions in their control not like us common folk’. He just didn’t say it, He meant it. This was how truly humble He always was.

Once after our talk, He began to speak about The Fakir. He had read it and He then told me, ‘so Ruzbeh did you write this book?’

I looked at Him and there as a twinkle in His eyes and I said, ‘no Dada the book was not written by me but it was written through me’. He looked at me deep in my eyes and then said, ‘good, good, remember we can’t write all this, I have never written a book, though my name has come on over hundred books. Our Master writes through us. Never forget this.’ This is who Dada really was. Grounded and always a disciple.

Every time I would meet Him, first He would inquire as to why am I not meeting Him more often. Once I told Him that I did not want to tire Him and He said, ‘you never tire me…I enjoy our talks….I hope you enjoy them too’.

Many times when we would begin our conversation He would be unwell or exhausted. I would request Him if He wanted to meet some other day and He would say ‘don’t worry I am perfectly fine’ but there were times I knew He was pushing Himself and we would conclude our talk in a short while. Some days He could talk with the enthusiasm of a child and He would chuckle and His eyes would twinkle and those days I knew all was well in Heaven and in this world.

Often when I would ask Him certain questions He would tell me that He had no idea or that He wasn’t sure of that particular query or that He had not really given a particular subject great thought. He never once tried to pretend that He knew it all or make up something just to appear erudite. He was a scholar. His memory even at the age of ninety eight years, when I met Him, was astounding. He could quote phrases from books, describe stories from scriptures, it was amazing to be just in His presence. He reminded me of true Sages and yet an elderly family member, always smiling, kind, ready to hear you out, giving sound counsel. There was nobody like Dada. I truly mean it.

Once He told me that, ‘Ruzbeh on this path, you will go through lots of hardship, go through them silently and take everything as a gift from your Master, never treat those trying times as a curse but more of a blessing’.

One day in His room, He sat reading something and I touched His feet and He tried to touch mine and I knelt and told Him, ‘why don’t you let me touch your feet….not as a Guru but as an elder and as our greatest well wisher’ and He caressed my head and smiled. He then spoke of our book that had been published and He told me that He enjoyed our conversations and missed them, and I told Him I missed Him a lot and He looked at me and said, ‘Ruzbeh you are always with me, I am never alone’ and I wanted to cry. That was the last time we met alone in His room.

Many months later, one evening I was home and suddenly I could feel Dada’s presence. I wasn’t thinking about Him. I was looking into the sky and I just felt His presence very strongly. He had been ailing since a while and was in the hospital. For twenty minutes He was in my thoughts and His presence was palpable.

The next day after making inquiries I got to know that exactly precisely the same time He had made His presence felt, His condition had deteriorated and He had to be put on the ventilator. A few days later He left His body.

I went to pay my last respects and seeing Him laid down, eyes shut, as always in peace, I felt happiness for Him that now He was completely with His Master but for some unknown reason, tears came gushing down.

I miss Him tremendously.