The Father, The Son But Who Is The Holy Spirit? 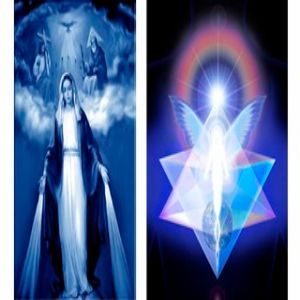 I got my invite to write for Speaking Tree on Good Friday last year and my first article appeared on Easter. For me it has been a very soul humbling experience and I hope my ramblings have given you some joy and hope; and not a perpetual migraine.

Most of the people who know of Lord Christ and Mother Mary, are usually aware of the sentence, In the Name of The Father, The Son and The Holy Spirit?

So who is This Holy Spirit?

We have The Creator…who is called The Father.

Then we have The Son…Jesus Christ and also all The Masters who have been filled with The Christ Energy.

Now who exactly is The Holy Spirit?

According to me The Holy Spirit is The Goddess Energy.

Thus, you have The Creator (Father Energy), The Son (The Christ or The Guru Energy) and then The Goddess (The Holy Spirit Energy, The Mother Energy.)

Lord Shiv Himself has said that He, Lord Shiv, without The Goddess Energy, called Shakti, is just “Shav” (a lifeless body).

The Holy Spirit is Shakti or Goddess Energy or life Energy.

Without The Holy Spirit or Shakti, Both God and Father, as well as Son and Christ Energy, are dormant Energies and it is only The Goddess Energy or The Mother Energy or Devi or The Holy Spirit that drives the engine of Creation.

Without Shakti or The Holy Spirit, you have squat.

Without the Holy Spirit you have dormancy, nothing moves.

The Holy Spirit is the very Life Force that cruises through every aspect of Creation. From a sapling to a Perfect Master, it is the Divine, Holy Spirit that gives life and then the various stages of evolution and involution of consciousness.

God is the CEO and without The Goddess He sits in His Radiance and Divinity, but Shakti is the One who carries His Radiance and Divinity and Fragrance to each living organism, the Life Force is The Goddess Energy. He has created the basic Memorandum of Understanding but it The Goddess that implements it but like a loving Mother, She wants no credit, so The Son, is filled with Her Energy and it is through The Christ Energy that The Perfect Masters along with The Archangels and The Angels run the show.

A grand production gone hilariously wrong as the star cast is mankind; the self destructive amalgam of piss and puss.

So, when you chant, In the Name of The Father, The Son and The Holy Spirit, you are calling upon the entire family, Dad, Son, and Mommy.

The Holy Ash, which He distributed, from the Holy Fire that still burns in Dwarkamai since more than a hundred and fifty years, He called It Dhuni Mai, The Mother again.

Why would Baba Sai call a Mosque and the Holy Fire, a Mother.

Because He sat in The Mosque but without The Holy Energy, The Holy Spirit, even He, my Sweetest Heart, my King, Baba Sai of Shirdi, would be only Shav…..just the body…..it is The Divinity that cruised through each cell within Him, through His very hair and nails, that made Him The Power House, The Giant of Giants, The King of all The Masters, The Rockstar with a Chillum, who He truly was.

A number of religions have down played the role of The Goddess Energy.

Zoroastrianism, Judaism, Christianity, and Islam to name a few, but the fact remains, if God is The Father and Christ is The Son, then there has to be a Mother, and The Holy Spirit is The Mother Energy.

Mother Mary didn’t need Father Joseph to conceive Jesus but The Lord needed Mother Mary to bring forth His Son, Jesus The Christ, to save us, suffering and constipated mankind.

Easter is The Power of The Holy Spirit (Goddess Energy) that fills the lifeless body of Jesus with Her Energy, The Christ Energy, The Divine Life Spark, which hails The Glory Of The Father, The Creator.

And also The Father, The Son and The Holy Spirit, forms The Holy Trinity.

The Holy Trinity that every religion talks about is Dad, Mom and a very Enlightened Bachha.

I am sure scholars and learned spiritual people, will have another take on this, Holy Spirit stuff, but this is my take and by now you my dear friend are sort of used to my ramblings.

I know the standard stuff spoken about The Trinity is that it is the Father who generates, the Son who is begotten, and the Holy Spirit who proceeds….

But my take is that the moment you have The Father and The Son….Lord with a dental issue…..you have to have The Mother. You can’t have Dad and Son, and no Mom.

Father who generates (means Creates), Son who is begotten (who comes down in the flesh to show the way) and The Holy Spirit who proceeds (proceeds means to move…in this case make things move…means energies stuff to move…means life spark…means Shakti…means Mommy).

Even the way the sign of the Cross is made by those in prayer signifies The Father, The Son and The Holy Spirit. Usually right hand touches the forehead and one mentions The Father, then the heart area where The Son is mentioned and then The Holy, where the left shoulder is touched and Spirit where the right shoulder is touched. (It seems Eastern Christians touch the right shoulder first and then left but that’s immaterial.)

So one starts off with….in the name of The Father, touching the forehead….more importantly the Third Eye Chakra….the head stands for thought, word, intellect, usually associated with The Male Energy (all those with a uterus no offence meant, I am just writing what the usual gender association is with, as according to me both genders don’t use their mind for most things).

Then one touches the heart area with the word The Son….heart area associated with the Heart Chakra, selfless love, compassion….extremely important for all Those Masters and those filled with The Christ or Krishna Energy working in the physical plane.

Once again this is my two-bit understanding.

The lap top I work on can be the male energy, the idiot typing this blog can be the conveyor or the one who gets the message across, but both the lap top and the idiot, without power to the lap top, can only best twiddle their toes, as without the power or energy or electricity or battery or Shakti or Electrical Force, the lap top is just a very expensive equipment to protect oneself when the wife goes nuts and begins to throw stuff at you from the kitchen. It is the power that starts the machine and the energy and inspiration that comes about to write it (energy and inspiration is once again a life spark, The Holy Spirit).

I know there are explanations and then there are more explanations. I have written my reality. It may make sense to you or you might think I have lost the plot, no matter what you think, one must realise that the yin and yang Energy that exists in every human, has to run through the very Creation, and it is the positive and negative that propels things to move forward and thus there has to be a Male and Female Energy in The Cosmos that has created everything in Its image.

We are after all created in the image of The Lord…image of The Lord…The Lord…. Ardhanarishvara, The androgynous form of Lord Shiv and Maa Parvati…or how I believe the Good God(dess) is, Our Father and Mother, as One Energy and The Son, The Christ Energy, thus, in The Name of The Father, The Son and The Holy Spirit.