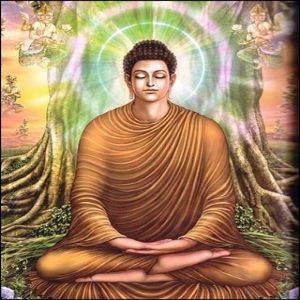 For me, Lord Buddha is not just The Awakened One and The Enlightened One but first and foremost He is The Compassionate One.

Compassionate because when He witnessed death, suffering, poverty, the travesty and the illusive glitter of the physical, He left everything in search of The Truth and through His Realisation kindled the spark of Compassion and True Knowledge for generations to benefit and follow.

Enlightenment, for me is the realisation that each one of us has come from The Great Flame. Each one of us comes from The Source of Oneness. That we are layered in bodies, the most fragile being the physical and that our bodies are going to decay and eventually become dust, but we, each one of us, carries within ourselves, eternal life.

Siddhārtha realised it all when he was exposed to the inevitable reality of the gross and material; the reality of decay and suffering.

The more we focus on the material and the physical, the more our spirit gets weak and the hold of the gross world gets stronger, and then the laws of the five elements and the laws of gravity, work on us, making us wither away, slowly but surely.

As I see it, Siddhārtha, didn’t become Enlightened or Awakened when He sat and meditated under the Bodhi tree. For me, He became Enlightened and Awakened when, as Siddhārtha, He left everything, realising how transitory and false the material world was. For me, Siddhārtha was already Enlightened when He operated from Compassion and left everything and everyone in search of The Eternal Truth. For me, it was Siddhārtha who was The Enlightened One; as being surrounded by pomp, glory, comfort and luxury, He stepped away to find Himself and awaken the Godhood that He knew lay dormant not only within Himself but in each being.

Aren’t we all dormant Avatars, Godhood covered under the debris of past and present lifetimes of piss, shit and Self-centeredness?

Enlightenment isn’t about having all the powers of Creation. It doesn’t mean awakening your Kundalini or having spiritual Powers and Knowledge. For me, Enlightenment means knowing that not only the physical isn’t the reality, but even the astral world and the causal world are different states of impermanence and that only The One and Oneness is real. We are covered with different layers of clothing, the physical, and other spirit bodies; but you and I, our real Self have no bodies, not even the spirit, as nothing can contain The One. You and I, in our purest form come from The One and thus are part of The One and hence eventually are The One. The True Self cannot have any clothing or cages, as we are Free, and that the only reality is that of Oneness.

Enlightenment means realising that Karma is going to play its role and shall not even make an exception for God, Goddess and Master…at the same time you still continue giving your best to life and then be in a state of positive acceptance and surrender and only operate through selfless Love. Spiritual powers and material wealth are a part of one’s Karmic blueprint and has nothing to do with the spiritual growth or purity or goodness in the present lifetime. The only way to The One is through compassion and more compassion and still more compassion and that compassion brings about Love; the True Love of Oneness.

Everything, including enlightenment will lead you to the door of Heaven, but it is compassion and selfless love which will allow you to enter through that door.

Buddha stands for Compassion. His journey began with Compassion. Till we truly understand this, we are only going to spend lifetimes trying to clutch water in our hands, keep spitting in the air and pissing against the wind.

Buddha knew that pride in the material is like abandoning the permanence of the Mountain and seeking shelter on sinking sand.

Our bodies are decaying every second. The world around is falling apart. Violence, hate, duality, ego, lust, power, jealousy aren’t the prerogative of politicians but exist in each of our hearts and homes.

Siddhārtha was aware of this and thus realised that if He wanted peace, sanity, Oneness, He had to leave it all in search of The Eternal Truth. Not Buddha, but Siddhārtha, and thus Buddha’s Enlightenment began as the young prince leaving it all for the True Path.

The Giants have suffered and when Enlightened, passed on Their realisations to all of us, but we are like maggots feeding off cadavers of the material rather than drinking from The Source of The Eternal permanence of The Spirit.

What have we learnt from The Giants? Nothing really, and sometimes I feel The Lord allowed Himself to be Crucified in vain.

Buddha is not about chanting and mantras and elaborate rituals and practices. He is about understanding the transitory nature of the physical and focusing on the permanence of The Spirit. His path is not the path of alienation and extremities, but the realisation that only moderation works when one with the five elements and the laws of the physical world and the hold of Mother Earth and The Power of Her Gravity.

Lord Buddha is The Compassionate One as it was Compassion that awakened Him and that led Him on His journey of Self Realisation and Oneness and Godhood.

“Charity knowledge and virtue are possessions that cannot be lost. To do a little good is worth more than accomplishing works of a difficult nature. The perfect man is nothing unless he pours out kindness on his fellow creatures, unless he consoles the abandoned. My doctrine is a doctrine of mercy. The way of salvation is open to all. Destroy your passions as the elephant would trample down a reed hut. But I would have you know that it is a mistaken idea to believe that one can escape from one’s passions by taking shelter in hermitages. The only remedy against evil is healthy reality.” So spoke The Buddha.

Is we can operate from Compassion and Love then our journey has commenced too; in spite of the filth and self-centeredness; in spite of our flaws and weaknesses; despite of all our past life baggage and traits and present life time upbringing and DNA; in spite and despite, if one can be a little more compassionate towards any or every being; we too shall walk on the footprints left behind by Siddhārtha, The Buddha.