Lord Ganesha…the pathway that leads to The Goddess 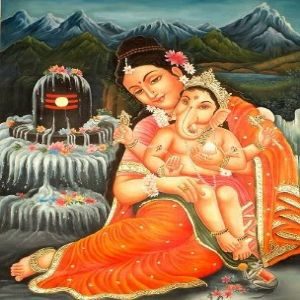 According to me the entire story of Lord Ganesha’s birth and the chopping off of His Head, is all symbolical. If it did take place, then there is a reason which is far more spiritual than what is made out to be.

So the story of Lord Ganesha as we have been told goes something like this. Maa Parvati decides to have somebody of Her own, whose very existence will be to love and be there for Her. Who will first and foremost obey Her word. So she applies paste on Her body and then removes the paste and creates Lord Ganesha. One day wanting to have a bath in peace, She tells Her Son, Ganesha, that no matter what, He should not let anybody enter the house.

He does just that. Nobody is allowed to enter. Even though war ensues, nobody is allowed to enter. He defeats all. When Lord Shiva tries to enter, He too is politely told to take a walk. Lord Shiva, first politely tries to reason with Ganesha, but when He realises that there is no way this Child is going to allow even Him to enter, He with His Trishul, chops off the Boy’s head. Maa Parvati comes out and witnesses Her Son lying on the floor with His Head chopped off, She decides to take the form of Maa Kali, and destroy all of Creation. All the Gods reason with Maa and assure Her that Her Son will live and an elephant, strolling along, finds its head releaved off its body and that head is put on the Child’s body and that is how we have Lord Ganesha as we know Him.

As a child I could never fathom this story. I mean, we are talking about Lord Shiv. The knower of all. Are we seriously trying to dare to suggest that Lord Shiva was unaware of such an important part of His and Maa’s life. Even if He was in meditation, all the more He is the knower of all, so there is no way He would be oblivious of such an important event. Now let us assume that for some reason He was oblivous to Lord Ganesha’s birth and Ganesha being Maa Parvati and His Son. Even then, are we trying to assume that He had such little control over His anger and ego that He chopped off a Child’s head. I mean if Gods go about chopping heads when denied admission, how does one expect, vermin mankind to practice restrain. And then, as a child I could never fathom, why chop off an innocent elephant’s head, that too a baby elephant, as how could the head of a large elephant fit on a small child. Why chop off the head when three Gods, Lord Shiva, Lord Vishnu and Lord Brahma, all were present. All They had to do was through Their powers, restore Lord Ganesha’s original head onto His Body. But no, They had to resort to another act of violence. If the first act of violence was due to anger and ego, annexing the elephant’s head was only an unmitigated disaster. Just as if you say a lie hundred times it does not become the truth, bringing forth life by killing something, does not speak of either spirituality or Godhood.

This is what I believe. If you are reading this rambling of mine, it means two things. First you are aware of the Chakras and the Kundalini. The second, you have a lot of spare time or nothing better to do.

So what are Chakras? They are supposedly Energy Centers situated on our etheral bodies that correspond to various organs in our physical body. So the Heart Chakra also corresponds to the region of the physical heart in the body.

So you have Seven Chakras. Six associated with the body and the Seventh, the Crown Chakra, floating a few inches above our fat heads, not associated with our body but with the Eternal Truth, the pathway to self realisation.

The energy resides in the Root Chakra, which is dormant and the main purpose of life, as we know it, is to make this Energy or Shakti or Kundalini, rise, go through each Chakra and then reside in the Crown Chakra. Many wise folks claim that there are many Chakras, but as i can barely understand google maps, there is no way I can fathom the path way to all the Chakras. Just suffice to say that we have Seven main Chakras and then there are various satellite Chakras and then beyond the Seventh Chakra are more, but as I still have trouble understanding where my gall bladder is, let us just get to the main point.

The Root Chakra, is called the Muladhara Chakra. Each Chakra has a symbol and colour, and sound, various stuff. I say not from experience but from respecting what Perfect Masters have explained. So the symbol of the Muladhara Chakra or the Root Chakra, is an elephant, which in Hinduism is the form of Lord Ganesha and thus Lord Ganesha is considered to be the God or the Gate keeper to this Chakra. Gate Keeper to reach The Goddess. The seat of all Kundalini Power or Shakti, reposes in the Muladhara Chakra. As mentioned of this most Powerful Chakra, Lord Ganesha presides. This Root Chakra, this gate needs to be opened for the Kundalini, the cosmic energy, The Goddess Energy, the energy of no beginning and no end, the source and destination of all knowledge and Oneness, to begin its journey to the Crown Chakra and beyond, to self realisation, to Aum Tat Sat, I Am That, to the realm of Oneness.

So for the Kundalini to rise, the Muladhara Chakra has to be activated. This chakra is also associated with earthiness and survival instinct and our need for the external. The Goddess Energy lies dormant as the mind is preoccupied with the gross and not the subtle and certainly not Oneness and union of Shiv Shakti.

Till this Chakra is not shaken up, the Shakti will remain dormant. The ego of each individual, the petty ego, that is considered in survival, the gross, the temporary, the mundane, resides in the mind, the mind in the consciousness, the consciousness in the brain and the brain in one’s fat head. Till this ego is not chopped off which would mean till the head filled only with the gross is not annexed, till then there is no way the individual can make his or her way upwards towards self realisation and Oneness.

So Shiva, the Yogi, the Big Boy, has no option but to chop off the false ego that is associated with the gross. Chop off the head that harbours this ego. Thus Shiva chops of the Boy’s head. The Goddess goes into a rage. Which means the Shakti which has been lying dormant begins to move. This Shakti is a billion times more powerful than all the nuclear bombs put together. If this Energy is not channeled in the right direction, it can create havoc. Maa Parvati takes on the form of Maa Kali, the One who destroys. The only way to prevent destruction is to put another head on the Boy’s head. Which means the false ego has been chopped off, but there is the need for another head to be put into place, to be able to first and foremost hold the Pure Ego, the Pure Consciousness and then that Pure Consciousness needs a channel or a tunnel or a pipe or a trunk to take that Energy of Pure Consciousness or Energy and direct it upward, through the other Chakras to then reside with The Mother.

The Elephant’s head is thus a symbolic representation of a vehicle that can sustain and contain the Energy and the trunk is the tunnel through which this Energy can be channeled upward.

As no spiritual growth can take place without chopping of the head of false ego and directing the Consciousness upwards towards The Mother Energy, the most auspicious of all things in Creation, that is why, for every auspicious beginning we pray to Lord Ganesha. It is only via Him, that all good can take place and take place calmly. Energy needs to be first and foremost pure and that pure Energy needs to be channeled upwards. But Energy in its Original Form is neither pure or impure, it is just energy.

When energy is used for sexual release, we term that energy as sexual energy but if that energy is used to work towards spiritualism, that very energy, which could have been discharged, leads to self realisation. The Energy is the same, the way we use it defines its destination and potential and capabilities.

Even Lord Brahma and Lord Vishnu could not calm Goddess Parvati from destroying the world by taking the form of Maa Kali. This is for the simple reason Lord Vishnu is the preserver and as a Preserver He could never fathom that sometimes death or destruction is instrumental for True Change. As an individual, our sole purpose is survival and often spiritual growth or perseverance goes against worldly growth and survival. Thus Lord Vishnu could be of no help here.

Lord Brahma is the Creator. The role of the Creator is to create while here we are talking about the destruction of the false ego, the death of the false ego. We want to create a life that is filled with what appeases to our senses. Going within and taking the Energy upward goes against logical reasoning for worldly success and creating wealth and power and success. Thus He too could never fathom death of one’s self or the false ego for moving upwards.

It is Lord Shiva, the eternal Yogi, the Transformer or crudely put, The Destroyer, who knew that for true growth, something had to be annexed, something had to die, or be chopped away and though it is His own Son, He went ahead and did so. We have both Lord Shiv and Maa Parvati residing within us as yin and yang Enery. It is when we take on the role of Lord Shiva the Transformer, we can take decisions, that though seem filled with destruction, in reality they are true transformation and thus it is the individual who has to first destroy something closest to Him or Her, the false ego for the real ego, The True Consciousness to emerge. And that is why Lord Shiv cuts off the head and that is why we need to cut off the false head which is seeped into slumber and the gross and endow oneself with the True Consciousness which cannot be contained in the false head. It needs a larger container or vehicle with the tusk to channel the Energy properly and steadily upwards.

So one needs to chop the head of the elephant and put it on the Boy’s head to get Lord Ganesha. One needs to cut off false ego, go within, and take the Energy upward. That is why the Muladhara Chakra, is called the Root Chakra, if the root is not strong, nothing is going to hold for long. The elephant has four feet, which means you need a solid foundation. The trunk that can go upward, skyward, towards Mommy.

This is my understanding of Lord Ganesha. I could be completely off the radar but then each one has his or her perception of reality and Oneness.