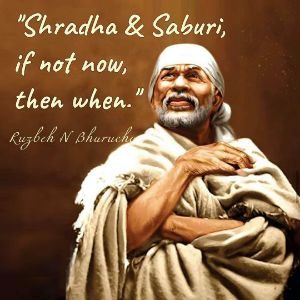 Through my years of channeling and I would like to believe I channel His Energy, I have learnt a few things about Baba Sai. This is my reality. Need not be yours.

If I were to sum up my spiritual journey and what I have learnt from Sai Baba of Shirdi and how He would like me to live my life it would all come down to this……give your divine best to each moment and then leave the rest joyously to one’s Goddess, God, Guru. All scriptures on one side and this philosophy on the other, I would every single time gravitate towards this guidance of Baba Sai to me.

Just give each moment our very best and after doing that go beyond what S(H)E has in store for us or what our own destiny or ramification of our Free Will has in store for us, and then embrace one’s lot joyfully. If I am granted this wish, I would know for sure my Baba Sai will be thrilled to bits.

I have learnt that Baba truly believes that wealth is for sharing and helping. He is big on feeding the poor, clothing the poor, being compassionate towards one and all. He insists that one needs to keep a part of one’s earnings to help those in need. He has a soft corner for those who go through their lives and their Karmic Cleansing with calmness, grace and humour. He is keen that one recognizes his or her true essence and that is ‘I am the spirit in the body…. I am not the body’.

He truly would like each one of us to make The Creator or one’s Master, one’s sole and soul priority. He advocates chanting mentally or audibly, the Master’s name or a Mantra or a Prayer, through the day, and thus, the Mantra will throb within one’s soul, through the night too.

He believes that one must first follow one’s religion; pray to one’s family Deity and the prayers which are advocated by one’s religion and then take His Name. When I began to channel, He had come through and said ‘if you do not say your religious Prayers then do not take my Name’.

Basically, He is big on Prayers, chanting, charity, compassion and calm acceptance of one’s lot.

But most importantly He wants each one of us to give each moment our very best and then leave the rest to one’s karmic blue print and the grace and wisdom of one’s Master.

He believes that each situation has three alternatives. The first is, if a situation is unpleasant, give it your best to change it to the overall wellbeing of all present. If after giving your best and still the situation still hasn’t changed, then you have the option of walking out. But often, a situation may not change and the option to walk out may not be possible or practical. Then one should make peace with the situation, and calmly try to make best out of all that which is possible. The third alternative is, which is not really an alternative, one cannot bring about positive change to the situation, one cannot walk out, but one refuses to make peace with one’s lot; instead, one stews and rots and burns. This is the worst of the three alternatives and Baba Sai has repeatedly advised those who come for channeling, to avoid this third path, as it leads to further worsening of the karmic blue print, brings forth pain, negativity and eventually takes one further away from the Path.

He doesn’t like slandering. It really saddens Him. To Him, those who back bite or indulge in slander are similar to eating what one had defecated. He is known to have said that, ‘Your conduct is similar to the pig which eats dung and excreta. You go on reviling your own brethren to your heart’s content.’

He doesn’t like His children to get into arguments. He believes one can state one’s point of view calmly but firmly. Arguments and fighting is like cutting one’s nose to spite one’s face.

He advocates one and all not to come from a state of reaction. Do not react, as then we are influenced by external factors and one has no control over external factors, and thus, one would spend one’s entire life reacting. He advocates to come from centeredness and rather than react to operate from a state of calmness, thus, one is in control of one’s action and words. Time and again He has told one and all in channeling that, the most effective Mantra, the King of all Mantras, is the Mantra called ‘shut up’. He believes most of our problems take place with what goes on inside the mouth and what comes out of the mouth. If one were silent and speak from the state of calmness, rather than a state of reaction and action, most of our problems would either be solved or would be far less exacting and tiresome.

Silence is the most effective springboard to connect with the Master and eventually to realize one’s own self and then one’s own Godhood.

He wants each of us to give and give and give. Help those in need. If one cannot give materially, one can give via a kind word, a tender smile, compassion, love, blessings and prayers.

He wants each one of us to know our strengths, weaknesses and limitations, and then, to act from our strengths and keep a distance from our weaknesses, as much of a distance that is possible. He doesn’t want us to flog ourselves when we fail or succumb to our weaknesses and limitations, but to first bring about a lengthier distance from our failing, slowly and steadily, till the distance is so far and distant, that one has nearly conquered it, rather than suppressed it.

He loves Mother Earth and wants us to give as much as possible back to Her, rather than keep taking and receiving from Her. He has a very soft corner for animals and all living beings.

He loves a good laugh and is not shy of abusing. (I think He also misses His chillum….that’s my opinion….statutory warning: children smoking is not good for health….it causes innumerable problems and is getting bloody expensive…there are various other ways of spoiling your health….anger, jealously, greed, ego, lust for power, money, the opposite sex….the same sex….or just normal good old breathing in our city air.)

He gets happy when one remembers Him or one’s Master before eating or drinking even water and not only to thank Him or one’s Master for the food or drink but also a small prayer that nobody goes hungry or thirsty, for food, water, clothing, shelter or any necessities. He says time and again, that simple prayers, from the heart, make a major difference to the Cosmos and the Energy and Vibration in the Cosmos. In fact time and again He has asked a number of those who have come for channeling to pray for all of Creation. The Mantra He has asked them to pray is, “Ya Sai Sarve Bhramand Sukh Shanti Krupa” (Oh Sai, let there be grace of peace and joy in all of Creation). He believes that if each of His children were to chant this prayer, the vibration created would bring about peace and joy to the lives of innumerable people and also to all of Creation. Each individual can make a difference. May be a small difference, but drop by drop, the ocean too is filled.

The other mantra He has given is Aum Sai Rakshak or Aum Sai Rakshak Sharanam Deva, (Sai Protect Me or Sai Protect Me and Keep Me in Your Refuge). This prayer is very powerful as not only are we asking Sai to protect us from the external world, but also, to protect us from the wrong use of Free Will, which then creates Karma that comes later on to haunt us, for that particular life, or sometimes for all of eternity.

One very important thing, He wants each one of us to go beyond His physical body. He has often told those who come for channeling and who plead that they want to see Him, “I have come many times, taken many incarnations….those who focus on this body of mine, this body that lived in Shirdi, would then never recognize Me if I were to come to them in any other body I had occupied in my other incarnations….but if you were to focus on My spirit…My energy….My true essence…you will recognize Me in any body I wish to show Myself to you, be it in a human Avatar or even that of an animal, bird, fish, or a butterfly.”

All His life, Baba Sai, lived for the poor. He helped the rich to become more giving, generous and compassionate to the plight of the needy; and the poor to live a life of dignity even in their state of poverty and hardship. He loved us so much that though once He had left His body for three days and His body was declared dead, He came back to serve and love and be amongst us in the flesh.

So through years of channeling, these are the few things that I have realised that matter to Baba Sai.

I know one thing, He truly is with us. I know that. But the question is how much are we with Him? Like He so often says in channeling, ‘The night doesn’t descend because the Sun has shown It’s back to the Earth, but because the Earth has shown Her back to the Sun’.