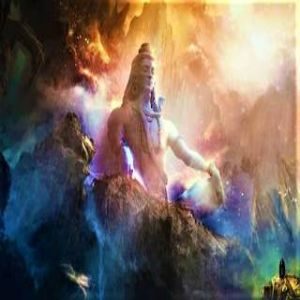 Yoga and Tantra, both in His grasp. Energy and matter. Spirit and the Body. Sublime and Raw Passion.

There is a poem by Rumi, which reminds me of Lord Shiva. It goes something like this, “Somewhere beyond right and wrong, there is a garden. I will meet you there”.

Lord Shiva and Goddess Parvati have various stories written about Them and Their Creation and Their Union, but for me, They are the physical manifestation of The Creator and The Creator is neither Male nor Female but a Union of both God and Goddess Energy and the closest resemblance one could dare fathom is that of Ardhanarishvara, which is depicted as One Body but made up of Lord Shiva and Maa Parvati. The Perfect Union of Masculine and Feminine Energy. One without the Other is not complete.

Shiv stands for detachment. He roams about in the crematorium, which is symbolic to the greatest reality, that change is the only constant thing in Creation. One is born and then one passes over to be born again and so on and so forth. To be attached to the temporary is an exercise in sheer futility or inanity. To give all pervasive importance to anything attached to the body or the physical is a sign of decay, as all that which is transient will decay one day. Only the Spirit lives on. To be attached to anything but this reality, that the only reality is that there is no reality but the existence of The One and the purpose of life or the journey of life, is to realize this reality and to move towards it and any by lane that moves away from this greatest reality is moving away from Lord Shiva.

According to me He does not preach to be aloof from the world but to be detached from one’s lower self and one’s own obsession with the transient nature of the physical and material. It is easy to be detached from the externals but to be detached from one’s own mind, cravings, paranoia, prejudices, pettiness, slander, fears, being judgmental and also from the importance of the ramifications of virtues and vices, as if one is good or noble or righteousness for any other reason other than for being good and noble and righteous, is then a business or has motives which move away from the Purity of Divinity.

Everything comes from Nothing and goes back to the Supreme State of Nothingness. Even Creation has come from Nothingness and preservation is a necessity of that State of Creation. Creation and preservation need it each other, but Nothingness needs Nothing and is dependent on Nothing. Hence It is independent and free from bondage of any sort. The true state of Creation is Divine Nothingness, Divine Darkness and Divine Stillness. But not many can conjure the Highest State of Oneness as a state of Divine Darkness or Divine Nothingness. That is why Maa Kali is envisioned Dark in color. She is The One who kills away all that which takes you away from the ultimate reality and thus She is associated with Darkness, the Divine Darkness.

Thus, Lord Shiva represents detachment and one can only merge with Him when you leave even yourself behind and operate from a finality of Oneness.

When love and hate do not ruffle us. When being judged and judging have lost their hold over our ego. When roaming in the crematorium, in the bowels of death or sitting majestically in the Himalayas, deep in meditation, mean the same. When the sky and Mother Earth both are as transitory as dew and thoughts, one begins the true journey to Lord Shiva.

Lord Shiva is the destroyer of all that which is false and illusionary. He is the vanquisher of ignorance. In my Fire Temple in Mumbai, Charni Road, there is a board, with sayings of Prophet Zarathushtra. I would read those sayings every day as I lived in the same colony where this beautiful Fire Temple is situated. One statement of The Prophet always confused my daft, young mind. Now the mind is no longer young but has managed to sustain its remarkable daftness as yet, for some reason this one statement makes a little more sense. The words…There is no greater sin than the sin of ignorance.

To go beyond this trap of ignorance one reaches out to Lord Shiva. It is through our ignorance that we gravitate to everything which is temporary. It is through the lack of ignorance and the embracing of wisdom that we move towards The One. Shiva is the Name of That One for me. Yes, S(H)e has many Names, Ahura Mazda, God, Allah, to name a few, and to reach The Divine Union one needs to go beyond the haze and trap of ignorance. The first step is to be detached from all the false and temporary perceptions and notions, and to move within and connect with one’s breath and then through the beautiful streams of the breath and the Inherent Energy, to be able to swim in the depths of Oneness and Stillness. It is through Stillness that all doors open, Stillness of one’s mind and breath and Stillness from the ranting and raving of one’s mind, false ego and the gravitational pull of the transitory and external and when one achieves this Stillness then one is be able to glimpse Shiva in all His Glory.