Glory Be To The Divine Mother 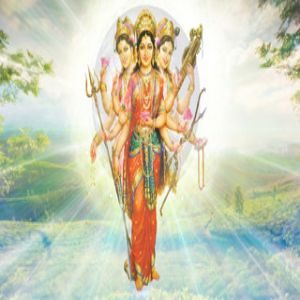 My association with The Goddess in this lifetime continued or began with my birth. I was born on Kali Chaudas Night, which is Diwali and/or Laxmi Pujan Day. My mother often told me that the doctors told her to hold onto to me in her stomach, as it would be good for her child if the child was born on the Night of Goddess Kali and the Day of Goddess Laxmi. So I can imagine my poor mother holding on to me for dear life and then when the doctor gave her the green signal, she sort of let go and I waltzed out, with a perpetual frown and a look of ‘damn it not again’.

When my dad and I would have a go at each other, I would remind him, that, when I was born crackers lit up the sky and there was celebration all around, and he would sigh and say that I had got it all wrong, mankind wasn’t celebrating, the Gods were rejoicing, having got rid of me at last and at least from the astral world for a while. In anger, he would remind me that I was born on the darkest Night of the year, and when happy, he would say I was blessed to have Two Mothers.

When I was around three or four years old, I used to go to a school at Charni Road, behind the Japanese Garden, Mumbai, and there were these beautiful statues of Lord Jesus and Mother Mary.

Twenty yards away from the school, there was a statue of Mother Mary kept inside a stone cave and I would be mesmerized standing in front of Her.

While growing up I would stand before Mother Kali’s statue in awe. I am certain that if She was on your side, even God would have to really think hard before He confronted you for all your wayward use of Free Will and its ramifications that would follow.

There were these two small Temples of Maa Kali and fifty feet away Maa Santoshi, and depending upon my state of mind, I would stand in front of The Goddess and sort of have a chat.

Then I met Swamiji Naik, who was the medium of Maa Mookambika Devi. He took Samadhi a few years back, but what a Sage and a Medium He was. I was privileged to write a book called The Devi’s Emerald and I would frequent Maa’s Temple in Bangalore, to interview Swamiji and His devotees and disciples.

I have personally seen Her grace, mercy, love and protection. Karma and everything else gets tossed out of one’s auric ambit if The Goddess decides to take mercy on you. Have shared divine moments with The Goddess and Swamiji; lots of grace, fun and food.

My association with The Goddess continues with Mother Mary, Ava Yasht and me going to Baba Jaan’s Dargah every week. I know that Baba Jaan; One of The Five Perfect Masters, would be upset with me for acknowledging The Goddess within, as S(h)e insisted on being called a Man, but I truly see The Mother Energy in all its glory in Baba Jaan.

Throughout my life I have prayed to The Male Energy of The Creator, but whenever I fall ill or even trip, through sheer reflex, the words Maa come out from the old fog horn. So I guess no matter what, The Mother Energy of The Creator is always called upon when we need comfort, protection, nurturing, pampering, mercy and grace.

Okay, enough of my ramblings.

Today is the First Day of Nav Ratras, the Nine Auspicious Nights of The Goddess Durga.

Durga means ‘The One who removes all misery from the journey of life’.

So the first Three Nights is in worship of Maa Durga, as it is Goddess Durga – Maa Kali, who destroys all evil and brings about a condition of purity and wellbeing to enter and flourish. Maa Durga is known to destroy demons who create a racket and havoc in paradise and trouble The Gods too. Basically, what we are praying is that, may Goddess Durga destroy all evil that lurks within us; all that which keeps purity and Godliness away from us. That is why Durga Maa is called Durgati Harini… ‘She who removes all evil tendencies’.

What does the buffalo generally represent? Sloth and inertia. (I do not want to upset or disrespect any buffalo or animal activist. I have deep respect for the latter and enjoy sweat meats made from the milk of the former.)

Anyway, don’t all of us have Mr. Mahishasura within us? Don’t we have the buffalo tendency of sloth and inertia within us? In spite of potential Godhood, don’t we all prefer to dwell in dark corners and not make the effort to realize our Godhood and Oneness?

So the first Three Nights, one worships Goddess Durga to clean us up from all that which is enveloped in darkness and dark energies and negativity.

Once the soil is cleaned up, then the next Three Nights Mother Laxmi is prayed to, so that She in Her grace bestows upon us, true knowledge of Oneness, pure selfless love, divine wisdom, complete wellbeing of body, heart, mind and soul. Of course nowadays Maa Laxmi is called upon to bless us with lot of smiling Mahatma Gandhis…preferably on thousand rupee notes; GOLD too- is most welcome. But Maa Laxmi is the Goddess of Wealth, not hard cash. Maa Laxmi when prayed to can bestow on us the greatest blessing, true wellbeing, which can come about through noble thoughts, words and deeds; and one who is blessed with this, is blessed with true wealth for one’s soul.

The last Three Nights one prays to Mother Saraswati. Maa Saraswati brings about joy of appreciating ‘the song and dance of life’. It is Maa Saraswati who bestows on the individual (after the basic instincts are dealt with by Maa Durga, and a state of centeredness and wellbeing is granted by Maa Laxmi), divine knowledge of one’s own self which is self realization of Oneness with The Creator.

Thus, these Nine Auspicious Nights are also a journey of the soul, from mire and muck to Divine Radiance. First cleansing is done; followed by nurturing of the soul and then realization dawns.

When one goes through the Nine Nights, the Tenth Day is that of Victory, Vijayadasami/or Dussehra or Dusa-hara (cutting of Ravan’s Ten Heads). Head usually stands for the mind. Mind usually is the warehouse of all the mess and all the crap and all the falseness and darkness; from pride to jealously to greed to ego. I don’t need to spell it out. We are all too well acquainted with these ten heads. At least I am.

When one achieves self realization through the grace of Maa Durga (Shakti – Parvati), Maa Laxmi, and Maa Saraswati; then there is victory of the soul, through self realization, Oneness and ultimately Godhood.

Goddess is the Energy within us all; man, woman, child, and all that which lives in all of creation. But approach Her as a child. Even God thinks twice before displeasing The Mother. And The Mother can’t see beyond Her child.

Jai Mata Di. Glory Be To The Divine Mother.