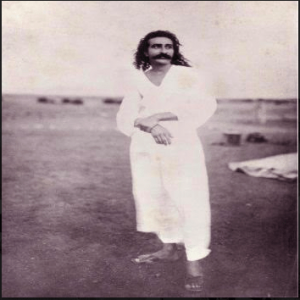 Avatar Meher Baba Ki Jai. We chant this Mantra in remembrance and praise of Meher Baba. January 31st He left His body or did He? Perfect Masters and Avatars never leave, They always have been, are and will remain.

Why would He insist that He would speak and deny all of Creation the sound of His beautiful voice? Did He change His mind? Did He see the futility of speaking to a world that is deaf or insists on not listening? Or did Meher Baba break His silence before He left His body?

What does it mean ‘to speak’ or ‘break one’s silence’? Does it mean vocally expressing Himself or does it mean making people listen and stop being deaf to the Glory and Mercy and Grace of One’s God, Goddess, Guru. If it is the latter then yes, Meher Baba has kept His word, as through these decades there have been more and more Meher Baba lovers…who love Him, have heard Him, seen Him, obey Him and follow Him. He has graced them through dreams, through miracles, through oracle, psychics and mediums and through ways and means Perfect Ones communicate with Their children.

This whole business of silence needs to be understood with more intent and clarity. Silence is the Sound of The Creator. S(H)e manifests through Silence. There is no greater or more potent force in all of Creation as Silence. The fact that Meher Baba communicated through sign language and His writings and books, meant that He was communicating and thus He wasn’t exactly silent. But for mankind only when an individual refuses to talk vocally does it mean that one is following the path of silence. Thus, I do not believe that Meher Baba was silent. He spoke and He spoke and He spoke but we were, are and will be deaf.

Do we follow Meher Baba? If yes, then we should be as silent as the tomb within. We should refrain from slander. We should turn our backs from all acrimony and gibberish within and outside. But no, we don’t do any of these things. But yes, we will talk softly when we are near Baba’s Samadhi or worse some holy than thou caretaker of the Samadhi will make sure nobody talks or children don’t play or giggle….why….because Meher Baba kept silent….or Meher Baba did not like joy and laughter and expression of love for Him and Mehera Maa and the Mandali through words. But during Aarti time anybody can sing and play musical instruments….no matter how out of tune or key….but otherwise ‘thou shall not speak’.

Our assumptions of silence are so off the radar that I can very well imagine Meher Baba using the choicest Zoroastrian Iranian swear words to express His disgust.

In 1968 Meher Baba had issued a few points in the form of ‘The Last Warning’. The first warning or guidance was clearly that we need to hold on to Baba’s Daman to the very end. What does that mean? Keep the faith. Don’t let doubt make you wonder hither and thither like a headless chicken. When things get rough or we make things rough by doing mental mathematics or our faith is based on give and take with one’s Master, we tend to move away from The One and The Path. So Meher Baba was clear, don’t move away from the Master and His or Her Path.

Then, there was this warning of ‘not getting intimately involved with the family affairs of one another nor should they be emotionally upset by such affairs’. What does this mean? Does it mean we should be detached from one’s family? Or does it mean when we are too entangled with one’s family one ceases to think calmly and being centered and when one is not centered and calm one can fall off The Path and make blunders and create karmas which could take eons to burn away.

Then ‘one should not succumb to lust’. Now this word ‘lust’ is a strange animal. We usually attribute it with sexual gratification and the constant urge to indulge and experience horizontal physical intimacy. I am sure sex is part of lust. But what is the exact meaning of ‘lust’. Is the all consuming need and want of sex the only attribute of lust? What about the over powering and all consuming need and want and itch for power, money, importance, attention? I think lust means anything which is irrational and all consuming which could make an individual resort to the basest act through the most obscene means.

Less aggressive towards others means come forth with compassion, love, largeness of the heart and minimal or no judgment. Less tolerant towards oneself means, not to cloak all our bullshit in the garb of personal reasons, childhood trauma, poor me victim syndrome.

Tell me, we all are Baba lovers. How many of us would have survived living with Baba? The Mandali did because they allowed Meher Baba to steam roll their ego into the warm embrace of Mother Earth. Meher Baba was a Spiritual Giant and Giants are tyrants and dictators, as They know what is best for Their lot and the only way to truly love The One is through complete obedience and surrender. Love is all about surrender and obedience. That is that. If you cannot completely surrender your ego to The One then love is self centered. If you cannot implicitly obey The One with all love and all happiness and completely in obeying then your so called obedience is nothing but a ruse, a show, manipulation.

Then comes ‘to beware at all times of persons who lead others into believing that they are saintly and pious and profess to possess supernatural powers. However pious such persons appear to be, a Baba-lover must never mix such piety with the Divinity of the Avatar.’ The Baba lovers seem to have gotten this statement a bit mixed up. Here Baba has clearly said two things. People can wear a garb of spirituality so be aware and that never to mix any kind of piety and spirituality with the Divinity of The Avatar. I do not think Meher Baba has said all those who are walking the path are hypocrites. He also has made it clear that however spiritual an individual is s(h)e can never match the Divinity of The Avatar.

Then Meher Baba warns that ‘true Baba-lover must remember the repeated warning given to all Baba lovers time and again to stay away from persons who feel and assert that they are masters and saints and possess powers to help human beings. His lovers and workers should never get involved with such persons and affairs, much less with perverted ‘helpers of humanity’ who have no reverence or regard for the Perfect Masters and the Avatar of the Age. Beware of them who exploit spirituality to gain their selfish ends and dupe others in the name of Sadguru’s and the Avatar’.

Once again this is self explanatory but there is one line which makes it ambiguous. ‘much less with perverted ‘helpers of humanity’ who have no reverence or regard for the Perfect Masters and the Avatar of the Age. Beware of them who exploit spirituality to gain their selfish ends and dupe others in the name of Sadgurus and the Avatar’. Does this mean that if a medium or a spiritual worker who is not perverted or who has all the reverence and regard for the Perfect Masters and the Avatar of the Age and who does not exploit for personal gains is somebody one can trust and go for guidance and help and can be trusted and how on earth does one know who is who in this time and age…so does that mean, one should never seek help and guidance from such folks who may, just may truly be selfless and want to help mankind in the best way he or she can possibly can?

Does it mean all those who connect with the other world, through Masters or even loved ones who have passed over are damned as all those who indulge in any paranormal or occult activities have been damned by Meher Baba? But Meher Baba has clearly mentioned that only those who use this power for selfish purposes or to create a false aura around themselves should be avoided but what about those idiots who truly are trying to spread The Light?

Meher Baba lives in each one of His lovers. It is our duty to respect Him by walking The Path. By being kind, helpful but most importantly being compassionate and humane. All of us who wear the so called spiritual garb seem to forget that the first pillar of spirituality is Calm Silence. Till we don’t respect this we can chant all the Jai Baba’s, but nothing is going to matter to Avatar Meher Baba.

That is why Meher Baba so loved Mehera Maa. She loved Him silently, completely, selflessly and most importantly with silent surrender and obedience.